Vij had volunteered in the phase three trials for Covaxin, which is being developed by Bharat Biotech 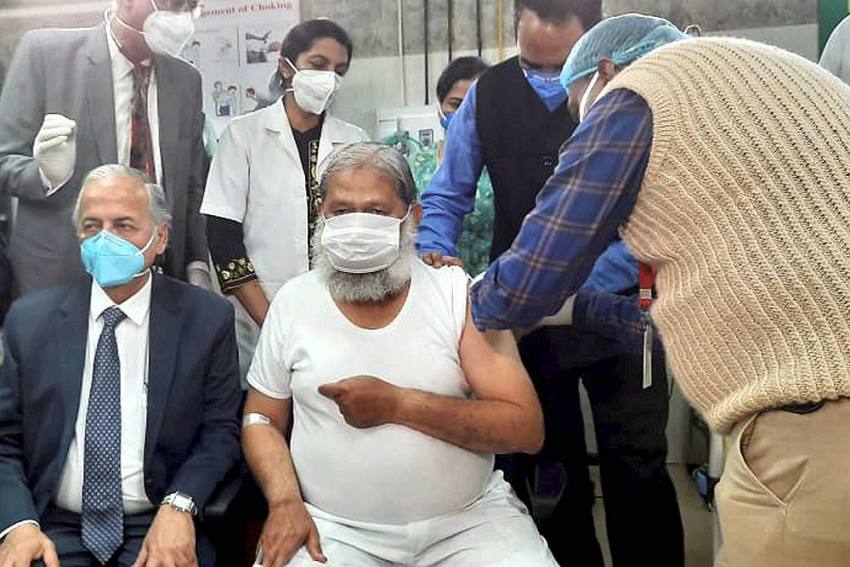 Haryana Health Minister Anil Vij, who got the first dose in the phase three trial of the two-shot COVID-19 vaccine Covaxin a fortnight ago, on Saturday said he has tested positive for the coronavirus.

Vij, 67, had offered to be the first volunteer in the phase three trial for Covaxin, an indigenous potential vaccine being developed by Bharat Biotech against COVID-19 in collaboration with the Indian Council of Medical Research (ICMR). He was administered the dose on November 20 at the Civil Hospital in Ambala Cantonment, about 50 km from Chandigarh.

"I have been tested Corona positive. I am admitted in Civil Hospital Ambala Cantt. All those who have come in close contact to me are advised to get themselves tested for corona (sic)," tweeted Vij, who is also the state's home minister.

Bharat Biotech took to Twitter to allay any concerns over the efficacy of the vaccine, saying clinical trials are based on a two-dose schedule, given 28 days apart. The vaccine efficacy will be determined two weeks after the second dose,it said.

“COVAXIN has been designed to be protective 2 weeks after volunteers receive the 2nd dose.

"The phase 3 trial is a double-blind study where volunteers have a 50 per cent chance of receiving either vaccine or placebo,” the Hyderabad-based vaccine maker said.

Stressing that experts would know better about how the COVID vaccine works, Vij told PTI over phone: "I was told that antibodies start to develop after the second dose, which is administered after 28 days of getting the first shot. And full antibodies are developed 14 days after the second dose is given. So, the complete cycle takes 42 days. In between there is no protection.”

Asked about his condition, Vij said he has sore throat, fever and body ache.

"But overall I am okay,” said Vij, who is a senior leader of the ruling Bharatiya Janata Party (BJP) and a legislator from Ambala Cantt assembly constituency.

The Union Health Ministry also stepped in to say that Covaxin is a two-dose anti-coronavirus vaccine and that he was given only the first dose.

"The antibodies against the infection build up in a human being only after a specific number of days pass after the second dose of the vaccine is taken. This is a two-dose vaccine. The minister in question has taken only one dose of the vaccine.," the ministry said in a statement.

Savita Verma, who is the principal investigator of the team formed to conduct the vaccine trial in the state, told reporters that on the 42nd day after the first shot is given, it is checked whether antibodies have been formed.

“If anyone is found positive for coronavirus, let us say on 10th, 12th or 14th day after receiving the first shot, then it cannot be termed as failure of vaccine because that time period (of 42 days) has not been completed,” she said.

She said when volunteers are administered the vaccine at the same time they are told to adhere to all Covid-related guidelines like wearing of masks and following social distancing norms.

Delhi Health Minister Satyendar Jain hoped the Centre will take cognisance of the "doubts raised about the efficacy of the vaccine and that it will be completely safe and effective".

Vij said he had gone to Panipat a few days ago where he spent 2-3 hours with a BJP leader, who too has tested positive for COVID-19.

"Later, I got myself tested, but the first test returned negative. After some symptoms showed up, the second test was done which was positive today,” he said.

A three-member delegation of the Jannayak Janta Party (JJP), the BJP's coalition partner in Haryana, had met Vij on Friday and sought withdrawal of cases registered in the state against farmers participating in the 'Delhi Chalo' march against the Centre's farm laws.

The delegation was led by JJP's state unit chief Nishan Singh and senior party leader Digvijay Singh Chautala was also a part of it.

Yoga guru Ramdev too had met Vij on Tuesday in his office where some mediapersons were also present.

"I will be administered a trial dose of Coronavirus vaccine #Covaxin a Bharat Biotech product Tomorrow at 11 am at Civil hospital, Ambala Cantt under the expert supervision of a team of doctors from PGI Rohtak and Health Department," Vij had said in a tweet a day before he was inoculated.

"I have volunteered to take the trial dose," he added.