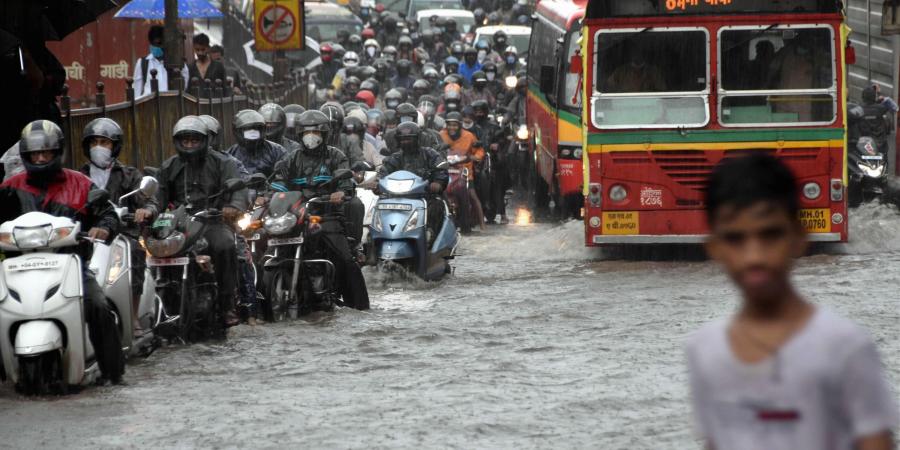 Since early morning on Friday, some parts of the Mumbai City and it's adjacent suburbs have witnessed heavy downpour causing disruption to the widely availed local train services as the tracks are submerged in water, officials confirmed.

According to the official statements, due to the heavy shower the suburban trains on the Central Railway’s main line as well as the Harbour line are delayed by 20 to 25 minutes behind their schedule.

Local train services are currently running only for personnel engaged in health and other essential services, and are out of bound for general commuters in view of the COVID-19 pandemic.

A civic official said that the city has been witnessing downpour since early morning, but its suburbs have reported more rainfall.

An official of the Central Railway said that due to water-logging on tracks near Kurla station in eastern Mumbai, suburban services on the main line (between Chhatrapati Shivaji MaharajTerminus and Kurla) and the Harbour line (CSMT-Vashi-Panvel) have been affected since morning.

"Due to heavy rains and water-logging on the slow lines near Kurla-Vidyavihar, local trains are running 20-25 minutes late," said Shivaji Sutar, chief public relations officer of the CR.

The slow line train traffic between Kurla-Vidyavihar has been diverted to the fast line, he said, adding that the locals on the Harbour line are also running 20-25 minutes behind schedule.
However, trains are running as per their normal schedule on the Thane-Vashi Transharbour route, he added.

The Central Railway runs suburban services on four separate suburban corridors in the Mumbai metropolitan region. Before the outbreak of the pandemic, it used to operate over 1,700 suburban services and ferry over 40 lakh passengers on a daily basis.

Meanwhile, the India Meteorological Department (IMD) had earlier predicted moderate to heavy rainfall in the city and suburbs with the possibility of very heavy rainfall at the isolated places on Friday.