Prime Minister Modi, flanked by US President Trump, on Monday categorically rejected any scope for third party mediation on Kashmir, saying it was a bilateral issue between India and Pakistan 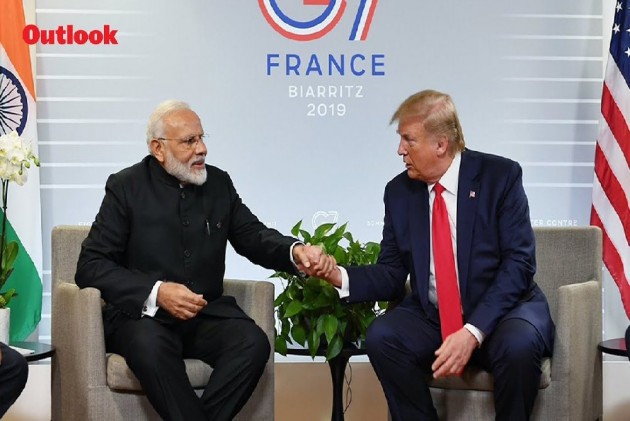 The White House on Monday claimed helping reduce India-Pakistan tension is one of the five big takeaways from the just-concluded G7 Summit.

President Donald Trump returned home from the Group of Seven Summit held in the French city of Biarritz from August 24 to 26.

In its daily round-up for Monday, the White House said, "The five big takeaways are: A message of unity, securing a billion-dollar trade deal, promoting the United States-Mexico-Canada Agreement (USMCA), developing stronger trade with Europe and helping to reduce India-Pakistan tension."

G7 Summit: India To Import More From US; Commerce Ministers To Hold Talks Over Trade Issues

"In his meeting with Prime Minister Narendra Modi of India, President Trump reaffirmed the need for dialogue between India and Pakistan and also worked to build on the great economic relations between our nations," it said.

Prime Minister Modi, flanked by Trump, on Monday categorically rejected any scope for third party mediation on Kashmir, saying it was a bilateral issue between India and Pakistan, and "we don't want to trouble any third country" -- a position that was immediately backed by the American leader who had recently offered to mediate.

In a tweet, the White House said during the meeting with Modi, Trump also acknowledged India's role as a critical partner in Afghanistan. The accompanying two photos released by the White House reflected a jubilant mood in the meeting room in France and the handshake between the two leaders.

"Trump met with world leaders to strengthen our alliances, secure better trade deals, and -- as always -- keep the interests of the American people front and centre on the global stage," the White House said.

During the summit, Trump worked with American allies to chart a course toward even more prosperity both here at home and around the world, the White House said.

According to the White House, Trump and President Emmanuel Macron of the host nation, worked together to achieve progress on a number of fronts, including global security, fair trade practices, and better economic opportunity for all.

"I want to thank you very much, Mr President, for the incredible job you did. This is a truly successful G7," Trump said.

"One of the biggest wins from the summit was President Trump's announcement of locking in a trade agreement with Prime Minister Shinzo Abe of Japan. The deal secures market access for a number of American agricultural goods, and Japan has agreed to purchase large sums of our farmers' corn," it said.

With Canadian Prime Minister Justin Trudeau by his side, Trump talked about the importance of expanding America's trading partnership with its neighbours bypassing the United States-Mexico-Canada Agreement (USMCA).

With both Canada and Mexico having essentially finalized the new deal, which replaced the North American Free Trade Agreement (NAFTA), Trump noted that it's time for US lawmakers to do the same.

During meeting with Chancellor Angela Merkel of Germany, Trump discussed how best to meet global and regional security challenges and previewed even better trade relations to come with Germany and the European Union, the White House said.

Germany is "a great trading partner," he said. "And we probably think we're going to be upping the trade over a very short period of time," the US President added.