India's tally of active Covid-19 cases mounted to1,68,627 on Monday, comprising 1.52 per cent of the total infections. 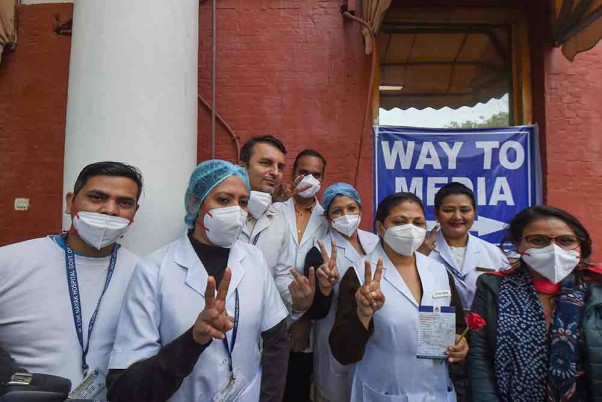 India's tally of active Covid-19 cases mounted to 1,68,627 on Monday. The health ministry highlighted five states that account for 84 per cent of the total active cases in the country. Maharashtra, Kerala, Punjab, Karnataka, Tamil Nadu and Gujarat are amongst the states that have witnessed a sudden spike in coronavirus cases.

With 15,510 fresh infections reported in a day, the aforementioned six states are contributing to 87.25 per cent of the new cases, the Union Health Ministry said.

Maharashtra alone accounts for 46.39 per cent of India's total active cases, followed by Kerala with 29.49 per cent.

Covid Vaccination Drive Starts Today: How To Find Centres Close To You, How To Apply

A total 15,510 new cases were registered in a span of 24 hours. Maharashtra continues to report the highest daily new cases at 8,293, followed by Kerala with 3,254 cases while Punjab has reported 579 new cases.

The Centre is continuously engaging with the states and union territories manifesting a higher number of active cases and those reporting a rise in the daily new Covid-19 cases.

States and UTs have been advised to maintain a continued rigorous vigil for containing the spread of COVID-19. The need for effective testing, comprehensive tracking, prompt isolation of positive cases and quick quarantine of close contacts are strongly emphasised, the ministry said.

"Eight states are displaying an upward trajectory in the daily new cases," it underlined.

The total number of cases with the UK, South Africa and Brazil variants of SARS-CoV-2 in the country as of date has reached 213, the ministry said.

"The next phase of Covid-19 vaccination has commenced from today for those who are over 60 years of age and for people aged 45 and above with specified comorbid conditions.

"A simplified process of registration has been set up, whereby potential beneficiaries can have the option of advance self-registration, on-site registration or facilitated cohort registration," the ministry said.

The ministry said 85.07 per cent of the new recovered cases are observed to be concentrated in six states.

Kerala has reported the maximum number of single-day recoveries with 4,333 newly-recovered cases. A total of 3,753 people recovered in Maharashtra in the past 24 hours, followed by 490 in Tamil Nadu.

Five states account for 86.79 per cent of the new deaths. Maharashtra saw the maximum casualties of 62 deaths. Kerala followed with 15 daily deaths and Punjab has reported seven fatalities in a span of  24 hours.