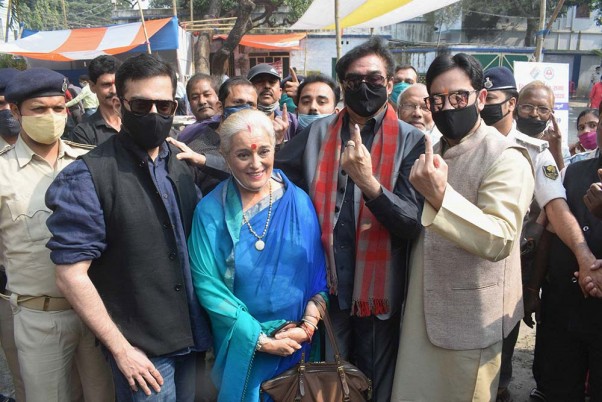 The exit polls which were conducted earlier had predicted a clear win for Grand Alliance (Mahagathbandhan) led by RJD's 31-year-old chief ministerial candidate Tejashwi Yadav. However, with each passing moment the battle to power is intensifying as the current trends show NDA leads from various seats.

Here is how some of the political leaders have reacted to the early trends:

"The issue has been cleared by Prime Minister Narendra Modi and party chief J P Nadda much before the elections," he said, while responding to a query whether Chief Minister Nitish Kumar will lead the NDA government if the alliance secures a majority in the assembly.

"I have been saying this for a long time that the NDA will form the government under the leadership of CM Nitish Kumar. The opposition ran a misleading campaign with several allurements to woo voters," state JD(U) chief Vashishtha Narayan Singh told reporters.

BJP leader Amit Malviya took to twitter and hailed BJP party for doing well in majority of states like MP, Gujarat, UP, Karnataka. He added, "It is not over till its over"

The BJP is doing very well across. It is leading in Madhya Pradesh, Gujarat, Uttar Pradesh, Karnataka and even Telangana by-polls... Not to mention Bihar where, along with its allies, it is doing much better than what the exit polls had predicted...

It is not over till its over.

JDU spokesperson K.C. Tyagi has already concede its defeat in Bihar Elections and blames Covid for possible defeat. He was quoted by ANI as saying, "A year ago, RJD couldn't win a single seat in Lok Sabha polls. As per Lok Sabha results, JDU & allies were to win over 200 seats. In last one year, nothing has harmed brand Nitish or added to brand RJD, we're losing only due to COVID19 impact:"

Taking a dig at the reliability of EVMs, Udit Raj tweeted, "If the direction of satellites to Mars and Moon can be controlled from Earth, then why can't EVM be hacked?" Udit Raj asked in a tweet in Hindi.

In another hindi tweet he asked, "If elections were held in America with EVMs, could Trump have lost?

In another tweet, he took a swipe at the BJP, saying it has been able to sideline Nitish Kumar with its performance in Bihar.

Shatrughan Sinha stays hopeful of the upcoming Bihar poll results. He said in a tweet that a new direction is awaited for the nation after the results.In a recent tweet, he said that he will restrain to comment any further on the poll results as it is still too soon to judge.

claims are all just hawa hawai??? Hope, wish & pray that Bihar results will show you the way & give a new direction to the nation. Jai Bihar! Jai Hind!@INCIndia@YashwantSinha@PawarSpeaks@Prithvrj@OfficeofUT@MamataOfficial@ShashiTharoor@ArvindKejriwal@msisodia

One has to be careful & watch! I'm offering no comments at the moment. Forwarding as received for your perusal, action, response, information & broadcasting. Jai Bihar! Jai Hind!https://t.co/HXtFEc140Chttps://t.co/nFu1muoO2M

Srivatsa slams the Indian media for hiding the real facts and calls it paid media. Here is the tweet:

Today, Paid Media will only talk about

1. Loss is only because of Nitish & has nothing to do with Modi

2. Win is only because of Tejaswi & has nothing to do with INC

Hitting out at Grand Alliance or Mahagathbandhan, Babul Supriyo expanded the acronym MGB as Mar Gaye Bhai. Check out his complete tweet:

Tejaswi calls Rahul Gandhi & says:
MGB = Mar Gaye Bhai !!
and I am saying it very seriously, yes all puns are V much intended• How dare people on Jail & Bail think that Bihar will forget all that?After all it was them on the ground who went they the torture of the ‘Jungla Raj’?

EC officials while briefing reporters in the national capital as the counting progressed in Bihar, said over 1 crore votes were counted till around 1.30 pm out of nearly 4.16 crore votes polled in the three-phase elections.

The BJP appeared set to outperform its senior alliance partner JD(U) headed by Chief Minister Nitish Kumar, according to trends available so far.