So far, 12 persons have died during post-poll violence in West Bengal, including six supporters of the BJP and five of the TMC. 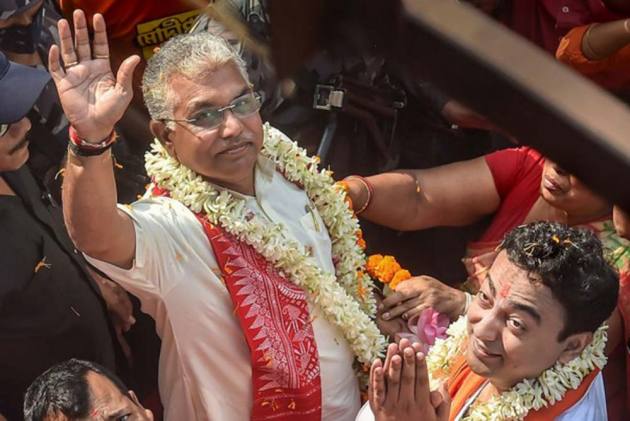 “Cowards talk of forgiveness. If BJP workers do not take revenge on TMC, then people of Bengal will call them cowards,’’ said the Bharatiya Janata Party (BJP) Bengal unit president and Lok Sabha MP Dilip Ghosh in June 2020, shortly after he launched one of his favourite political slogans, “Bodol Hobey, Bodlao Hobey”, which meant there will be a change (in the government) and revenge (on TMC workers) as well.

This was not a one-off remark, neither one for which Ghosh apologised. While the BJP’s central leadership, including Prime Minister Narendra Modi and Union home minister Amit Shah, repeatedly accused West Bengal’s ruling party, Mamata Banerjee’s Trinamool Congress (TMC), of unleashing a reign of political terror and goondaraaj, the BJP’s Bengal unit leaders, led by Dilip Ghosh, have themselves made a series of violence-invoking statements that earned them widespread condemnation.

Since the declaration of the Assembly election results that saw Mamata Banerjee returning to power with a thumping majority despite the BJP’s elaborate and extensive campaign often being dubbed as a modern-day Rajasuya Yajna, the BJP national leadership has called for protests on social media platforms citing post-poll violence perpetrated by the TMC. Many of them demanded deployment of central paramilitary forces and imposition of President’s Rule in the state.

‘Don’t Risk It’: Opposition Leaders Lash Out At BJP For Its Decision To Hold Nationwide Dharna

In response, several social media users in West Bengal shared video clips and news reports of Ghosh’s past speeches, citing how the BJP could not wash off its hands from the chain of events after the election results – 12 persons died in political clashes, including six supporters of the BJP and five of the TMC.

“This man (in the video) should be immediately arrested and dragged to a jail with a rope tied to his waist for all the incidents of post-poll violence,” filmmaker Aniket Chattopadhyay wrote in a Facebook post while sharing a compilation of clippings from Ghosh’s speeches.

The compilation included dialogues like “will chase them down and kill like dogs”, “there will be no one to look after your wives and children”, “we will count the bullets and you will count the bodies,” and “don’t bother us, your children will be orphaned, first we will stop water and then electricity and will close the door and give a perfect thrashing… the sounds of the crushing of the bones will reach Kalighat.”

Examples are endless. Two of his oft-repeated dialogue have been: “you will be shortened by six inches from the top” and “will bury you six feet under the soil.” On some occasions, he even gave the TMC leaders a choice between the two. “Let me know which way you prefer,” Ghosh had said in June 2014 while addressing a rally of the Rashtriya Swayamsevak Sangh (RSS) protesting the TMC’s atrocities on RSS workers. He offered the same choice later while acting as the BJP’s state unit president.

Six months later, the RSS sent him, a pracharak or whole-timer at that time, to the BJP. He became a state unit president at the end of 2015 and has since then built an unmatched reputation for infuriating speeches.

In November 2018, while addressing a rally in West Burdwan district, he said, “We won’t send you to any hospital. We don’t believe in that. We will send you directly to the crematorium.” He did not stop there though, referring to film star Mithun Chakraborty’s dialogue in a Bengali film, he said, “That dialogue said we’ll hit you here and your body will land in the crematorium… but I am saying that we’ll hit you here and bodies will land everywhere.”

In August 2019, Ghosh, while addressing a rally protesting the police’s role in implicating BJP workers in false cases, said, “They have even slapped murder cases against me. If I start killing, I will wipe out families. Then he continued, “Beat them up, finish them, the rest is my responsibility. If you can’t do that I will not take you for a BJP worker.”

Just a few days later, he said, while addressing a rally in West Midnapore district, “We have been into the politics of resistance for long. Now we’ll be in the politics of revenge. I am telling the workers, do not come to me crying after being beaten up. Come only after we have taken revenge.”

In December 2019, while speaking in the context of protests against the passage of Citizenship Amendment Act in Parliament, Ghosh said in Bengal that five million infiltrators belonging to a particular religion had made West Bengal home and that the party will first get their names stricken off the voter list and then drive them out of the country.

Such dialogues continued even in the run-up to the elections, and during the month-long polling schedule.

On Tuesday, amidst the clashes, Facebook user Niloy Patra listed 10 such dialogues by Ghosh and nine other Bengal BJP leaders like state unit general secretary Sayantan Bose and former national secretary Rahul Sinha. Partha Das, too, listed the choicest of Ghosh’s remarks. Many social media users shared these listicles on Ghosh and other BJP leaders, arguing that the BJP leaders should also apologise for their speeches that turned the situation volatile.

Dilip Ghosh had always defended all his controversial speeches and never apologised. He has been insisting that he speaks the language that the TMC understands.