Heroin Worth Over Rs 2 Crore Recovered From Assam, One held

On a tip-off, police searched a passenger bus coming from Manipur at Laharijan on Friday night and seized the heroin concealed in 27 soap boxes. 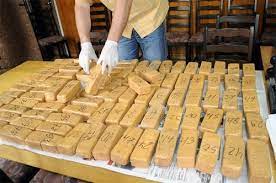 Assam police arrested one person and seized heroin weighing around 339.2 gm worth Rs 2.5 crore from his possession in Khatkhati area of Assam's Karbi Anglong district, police said on Saturday.

On a tip-off, police searched a passenger bus coming from Manipur at Laharijan on Friday night and seized the heroin concealed in 27 soap boxes, an officer said.

The arrested person hails from the neighbouring state, he said.