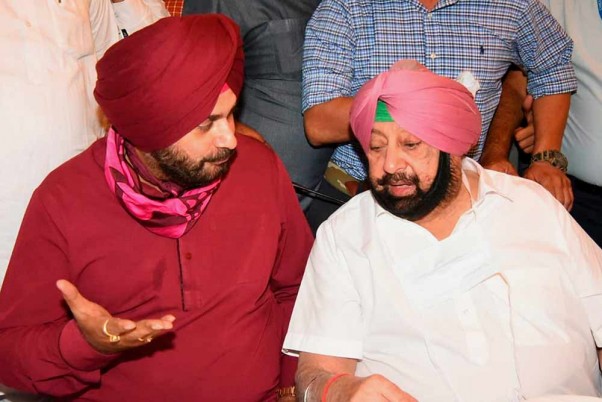 AICC general secretary Harish Rawat on Wednesday said the next year’s Punjab Assembly polls will be fought under the leadership of CM Amarinder Singh, delivering a snub to ministers in the Navjot Singh Sidhu camp who want the CM replaced.

"Navjot Singh Sidhu comes from a different background. We made him the Punjab Congress president with an eye on future. But that doesn't mean the entire party has been left to him," Rawat told reporters in Dehradun where four disgruntled ministers and three party MLAs met him.

How Long Will Truce Between Amarinder Singh, Najvot Sidhu Last?

Can Amarinder And Sidhu Lead Congress To Poll Battle As A United Army?

The Punjab Congress has no dearth of leaders, said Rawat, who is the in-charge of Punjab affairs at the AICC.

"Sidhu ji is there, Amarinder Singh is there, Rajinder Singh Bajwa is there, Sukhjindher Randhava is there and above all a stalwart like Ambika Soni is there. They will all be taken into confidence to resolve the issue," he said.

The announcement by Rawat is being seen as a setback to the dissident leaders.

There is no threat to the Amarinder Singh-led government in Punjab and the party's victory prospects for the upcoming Assembly elections, Rawat said.

Before meeting the Congress leaders at a hotel, Rawat said, "We will fight the (Punjab) elections in 2022 under the leadership of Amarinder Singh."

After the meeting, Rawat said the Congress leaders told him that they were not against any individual but were concerned about winning prospects of the party in the Assembly polls.

Asked whether they sought replacement of the CM, Rawat said whatever discussion took place is not meant for sharing with the media.

The legislators brought up a matter to which a solution will be found in consultation with party leaders, he said.

Rawat further stressed, "If any Congress MLA feels insecure and feels that the administration could work against him, it is worrisome."

However, he said if someone is upset with anyone, then it should not come in the way of the Congress and stressed that it is important for the party to fight the polls unitedly.

The Congress leaders assured that they have full faith in the party high command, said Rawat, adding that he told them he would talk to people concerned if need arises.

To a question that some ministers are upset with the CM, he said, "It happens. It is possible. They came here as I could not go there."

Rawat said he will go to Delhi in the next one or two days and meet senior party leaders.

After the meeting, Punjab Cabinet minister Charanjit Singh Channi told reporters that Rawat was convinced with the issues raised by them.

"We brought Punjab issues which still remain unresolved and he (Rawat) heard us and told us that he will take up the issues with the high command," he said.

"We are going back on his assurance," Channi added, stressing that if the party high command calls them, they will go to Delhi.

Whatever decision the party high command takes, they will go by it, he said.

"We stand by what happened yesterday," he replied to a question.

The Congress MLAs who accompanied the ministers to Dehradun were Kulbir Singh Zira, Surjit Dhiman and Barindermeet Singh Pahra.

Kaur, who is Amarinder Singh’s wife, asked those who have raised a banner of revolt against the chief minister to refrain from doing it as it was "damaging" the party ahead of the Assembly polls.