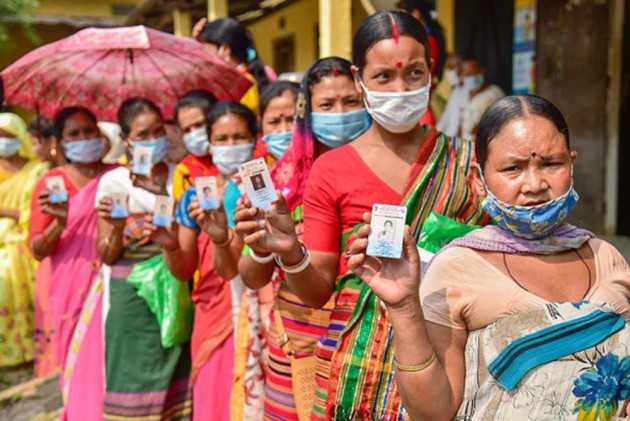 Clashes marred the third phase of elections in West Bengal while the three-phase Assembly election culminated in Assam with nearly 79 per cent polling in the final round in the state.

A high voter turnout was recorded in Kerala, Tamil Nadu and Puducherry Assembly elections on Tuesday, with the Congress along with its allies like the DMK locked in a keen contest to regain turf in South India.

In Assam, the ruling BJP is battling the Congress-led alliance to retain power, while the trend of high turnout and violence during polling continued in West Bengal as the ruling Trinamool Congress, the BJP and the Left-Congress alliance put up an intense fight in the high-stake contest.

Five candidates, including two women, were assaulted in poll-related clashes as over 77 per cent voting was recorded in 31 seats in West Bengal till 5pm in the third phase.

Violence was reported in areas like Uluberia, Khanakul, Falta, Canning Purba, Durbrajpur and Hooghly, where a BJP supporter’s family member was killed.

The state is having eight-phase elections.

In Kerala, where the Left is hoping to beat anti-incumbency to retain power, a feat unseen in four decades, while the BJP is making efforts to build inroads, nearly 74 per cent polling was recorded till 7pm. There was 63.47 per cent voting in Tamil Nadu for 234 Assembly constituencies and 77.90 per cent in Puducherry till 5pm.

Apart from Bengal, stray incidents of clashes between workers of rival parties were also reported in other states.

The massive polling exercise following Covid-19 health protocol and involving lakhs of personnel began at 7am and the last hour from 6pm to 7pm was set aside for Covid-19 patients and those under isolation.

DMK Lok Sabha MP Kanimozhi, who is being treated for Covid-19, voted at a polling station in Chennai while wearing a personal protective equipment kit.

In Tamil Nadu, both the Dravidian parties AIADMK and DMK went into the election without their stalwarts, J Jayalalithaa and M Karunanidhi.

Chief Minister K Palaniswami and his deputy O Panneerselvam will cement their position as successors of Jayalalithaa if the All India Anna Dravida Munnetra Kazagham (AIADMK) retains power though it faces an uphill task especially after the rout in the 2019 Lok Sabha election when the DMK-led alliance won 38 out of 39 seats.

The AIADMK had scored successive wins in 2011 and in 2016, when Jayalalithaa bucked the anti-incumbency trend -- the first by anyone in nearly three decades in the state.

After a narrow defeat in the last Assembly election where several exit polls had predicted his party’s win, Dravida Munnetra Kazhagam (DMK) chief MK Stalin spearheaded a determined election campaign this time and vigorously toured the state to take on the ruling AIADMK.

He is seeking re-election for the straight third term from the Kolathur segment here while his son and party youth wing secretary Udhayanidhi Stalin is debuting from Chepauk-Triplicance constituency.

AIADMK Lok Sabha MP P Ravindhranath alleged that he and his supporters were attacked by DMK men on Tuesday. DMK's Thondamuthur constituency nominee in Coimbatore district, Karthikeya Sivesenapathy alleged that ruling AIADMK and BJP people tried to attack him when he was travelling in a car.

Makkal Needhi Maiam, founded in 2018 and led by actor-politician Kamal Haasan, is trying its luck in Assembly polls for the first time.

The Congress, an ally of the DMK, is in the fray in 25 Assembly segments.

The counting of votes in the states will be held on May 2.

In Kerala, where the Left Democratic Front (LDF) is seeking to break the state's four-decade-old trend of swinging between the communists and the Congress-led United Democratic Front, the electors decided the fate of 957 candidates in 140 Assembly constituencies across the state.

The poll is significant for Kerala Congress (M) chief Jose K Mani who recently snapped decades-long ties with the UDF and joined hands with the Left Front.

Congress leader Rahul Gandhi had camped in the state for several days and taken part in dozens of corner meetings and rallies, with the party hoping that the state will herald a turn in its electoral fortunes after a series of disappointments in recent years.

Two voters, including a woman, standing in the queue in Aranmula in Pathnamthitta and Chavittuavary in Kottayam collapsed and died.

Tempers ran high at Kattayikonam in Kazhakootam constituency, a stronghold of the Marxist party in Thiruvananthapuram district, as CPI(M) and BJP workers clashed.

Four BJP workers were injured and their car was damaged.

Devaswom Minister Kadakampally Surendran, who is the LDF candidate from the constituency, told reporters that the protestors aimed to disrupt the voting procedure and alleged that police had acted as "BJP agent".

Three Marxist workers, including the minister's personal staff, have been taken into custody. Sobha Surendran, the BJP candidate from Kazhakootam constituency, had earlier in the day held a sit-in in front of a polling booth in the area.

Chief Minister Pinarayi Vijayan, seeking re-election from Dharmadom in Kannur, expressed confidence that the LDF would be voted back to power and register a “historic win”.

The BJP account in Nemom, the solitary seat won by the saffron party in the 2016 polls, will be “closed”, he said.

Congress leader Shashi Tharoor, however, said that a high turnout always augurs well for the UDF.

Puducherry witnessed a contest between the AINRC-led NDA and the Congress-led Secular Democratic alliance.

While AINRC fielded candidates in 16 of the total 30 constituencies the BJP is contesting nine seats while the AIADMK is contesting five seats.

Yanam, where the AINRC leader N Rangasamy is contesting, registered a higher percentage of polling than other regions.

The Congress has fielded candidates in 14 out of the 15 seats; it

is supporting an independent in Yanam.

The DMK, its main alliance partner, has fielded candidates in 13 seats and the VCK and CPI are contesting from one constituency each.

The Congress-led government in the Union Territory had collapsed just before the elections.