Dharamshala had recorded 79.4 mm of rainfall within 12 hours against the normal rainfall of 21.2 mm, causing sudden flash floods and disruption of the roads. 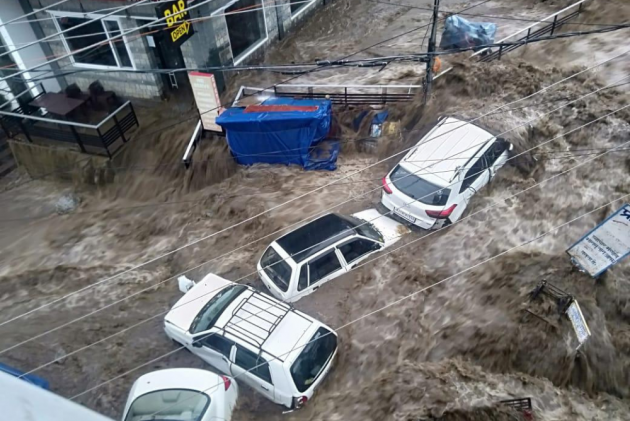 With monsoon onset of monsoon in Himachal Pradesh, a cloudburst triggered massive devastation in several parts of the state in the form of flash floods at Mcleodganj, Dharamshala and massive landslides blocking Chandigarh -Manali National highway.  The incidents have provoked an obvious warning for the tourists thronging travel hotspots in the hill state, despite Covid warning.

Ten persons are missing at Dharamshala after flash flood caused by cloud burst and building collapse. Four persons are reportedly trapped at an island of Giri river in Sirmaur district and orders have been issued to airlift them.

Thakur also issued directions to all DCs to stop tourists going to places prone to landslides and other natural calamities.

More than 20 people were on Monday stranded in the Bow Valley of Kangra and massive operations to evacuate them have been undertaken by the administration.

Deputy Commissioner Dr Nipun Jindal and Superintendent of Police Vimut Ranjan visited Bow valley after the landslide. Four persons have been rescued but there are more people trapped, said a report. Earlier 80 persons were shifted to safer places in the Triyund area of Kangra

Dharamshala had recorded 79.4 mm of rainfall within 12 hours against the normal rainfall of 21.2 mm. This is also one of the reasons for sudden flash floods and disruption of the roads.

Deputy Commissioner Kangra Dr Nipun Jindal said all disaster response measures have been activated, up to the micro-level and affected people given relief and shifted to temporary shelters.

He was prompt to issue an advisory to the tourists and locals not to venture out to the tourist spots or rather avoid travels due to the inclement weather and MeT warning for more rains.

"People are requested to postpone their travel plans to Dharamshala to avoid any inconvenience,"  Deputy Commissioner of Kangra posted on their official Twitter account.

Dr Jindal, who was posted as DC Kangra until recently said,  "Tourists who are already in Dharamshala are requested to stay put as heavy rains have damaged the roads, impacting the movement of traffic."

Despite a drop in tourist arrivals in the state last week, most tourist destinations are still seeing arrivals mostly from the Punjab, Haryana, Chandigarh, Delhi and Noida. Many don’t follow Covid-appropriate behaviour even as they get ready to pay the fine.

Earlier in the day, several tourists' vehicles and also those belonging to locals were seen floating in the flash flood like paper while houses and business establishments came crumbling down as they got swept in the flash flood.

Videos and photos from Bhagsu Nag,  a popular tourist spot near a waterfall,  show that the area suffered the worst damage as water entered the hotels and residential areas.

Former SP Kangra Sanjeev Gandhi claimed that the Bhagsunag incident may not be the result of the cloudburst but a blockage of water inflow that caused flooding.

Meanwhile, Deputy Commissioner Lahaul Spiti Neeraj Kumar has also sounded an alert in the district to the tourists and locals asking them to remain alert to possibilities of natural calamities as a lot of tourists, adventure lovers and holidaymakers were in the area.

The Chandigarh–Manali national highway was also blocked because of a massive landslide near Pandoh in Mandi. Even the alternate road to Manali via Mandi-Katola has been blocked. There is no motor communication with Manali and Lahaul Spiti as of now.

Tourists have been told not to take the road back till the landslide was cleared as falling rocks caving in on the national highway could be dangerous.

The MeT department has issued yellow weather warnings for July 14 and 15.