Situated in the Great Himalayan National Park, the polling booth at Shakti has no electricity, phone, internet connectivity. 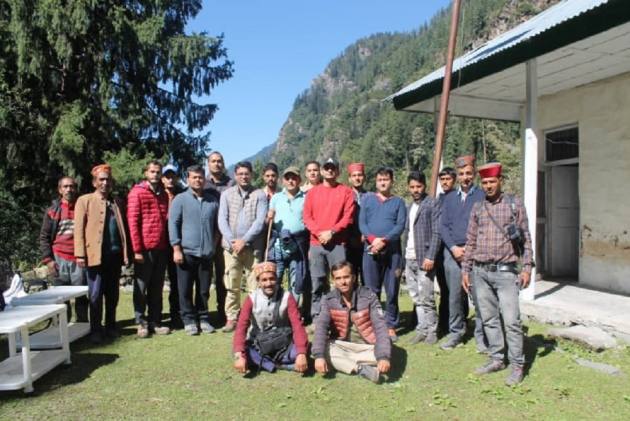 Deep inside Sainj valley in Himachal Pradesh’s Kullu district, a polling booth that can only be reached after a 24- km arduous trek through a track that passes through high-altitude valleys, glacier-fed streams and thick forests rich in wildlife and biodiversity, is worthy of hogging the national spotlight.

Besides Shakti, location of the farthest polling station set up by the Election Commission in Mandi parliamentary constituency, residents of of two other adjacent villages (also falling in the GHNP) will vote for the bypoll on October 30.

Shimla's Coolies Are Vanishing Into Oblivion

“This is only polling booth in Himachal Pradesh, a state with 100 percent electricity coverage and mobile phone connectivity, which present different challenges in conducting the polls. There is no electricity and internet connectivity at this booth,” said the state’s Chief Electoral Officer C. Paulrasu.

Since natives of three villages--Shakti, Maror and Sugad--had refused to shift out of the barely accessible sanctuary area despite having been promised proper rehabilitation elsewhere outside the GHNP, the government could not properly develop infrastructure--build roads, lay electricity lines or roll out welfare schemes.

Deputy Commissioner Kullu Ashutosh Garg, who visited the village last week after walking the 24 kms, told Outlook that villagers admit their inability to avail the benefits of economic and social welfare schemes, but are still reluctant to move out.

Fortunately, some village youths who have completed schooling are now willing to help the local administration to end the villages’ isolation. One of them, 24-yr old Dharampal, who was elected to a block development committee, says the existing rules of the Forest Conservation Act don’t permit the construction of roads or other facilities.

Rakesh Kanwar, Secretary (Finance) ,who had earlier served as DC, Kullu, recalled having tried to persuade the villagers to agree to a rehabilitation plan. “Because people in Kullu have a lot of faith in their deities and devtas, I took upon myself to convince a Devta too. But I failed,” Kanwar recollects.

In the upcoming by-election, the polling party will travel the 24 km distance to set up a polling booth at Shakti, and the Deputy Commissioner has already made arrangements to ensure the participation of all 88 eligible voters on October 30.

Predictably, none of the contesting candidates could campaign in any of the three villages.

The eldest voter there, 108-yr old Shari Devi, died recently. She had exercised her voting right in the 2019 Lok Sabha polls.

“The other three booths in Himachal Pradesh that require long journeys on foot include Sat Kuthra in Fatehpur assembly constituency in Kangra, Thansar in Jubbal-Kotkhai (Shimla) and Arki constituency of Solan district,” says Paulrasu.