Ministers, Speaker get charge of districts to help curb alarming rise in infections. 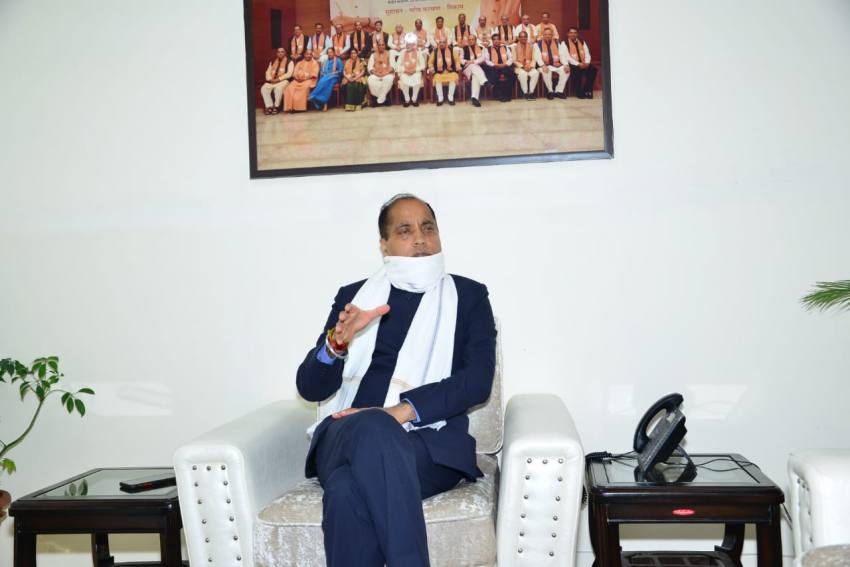 Worried at speed with which Covid had spread in Himachal Pradesh, Chief Minister Jai Ram Thakur on Wednesday summoned deputy commissioners and superintendents of police to Shimla for a marathon daylong session to identify the reasons for the surge and hinted at some tough measures if required.

Beginning early in the day at 10 am, the chief minister sat through the deliberations beyond the scheduled 9 pm deadline to listen to the DCs – who were asked to make presentations on Covid and suggest measures.

“One thing has come out very clearly that the people became careless, not adhering to the Covid protocols of wearing masks and observing social distancing at weddings, social, religious and other community gatherings. This is the biggest lapse besides some reports about conditions in the hospitals also contributing to a high mortality rate,” he said at the meeting.

Himachal Gets Tough: Arrest Without Warrant, 8-Day Jail For Not Wearing Masks

The government has now fixed a limit of 50 people in all the social, religious and political functions. The police in Kullu district have started visiting the wedding venues and other gatherings to check adherence to the Covid norms.

The hosts will be required to obtain written permission from the sub-divisional magistrates for any function, including ceremonies and weddings. Sector magistrates have been empowered to check violations and impose penalties on the spot ranging from Rs 5,000 to Rs 20,000.

The chief minister said if the situation did not improve within a week’s time, then more tough measures will be invoked.

The state Assembly’s winter session has been called off due to spike in the cases. All ministers, MLAs and MPs have been restrained from attending, organising or hosting the official functions, inaugurations, laying of foundation stones or organising political functions. Everything will be held virtual if needed.

Now, as a new measure, the cabinet ministers have been made in-charge of the specific districts, a few of their home districts, to oversee the Covid situation, hold regular interactions with the patients, or those who got cured and even call up relatives of the patients to get feedback/update on the patients’ health and conditions in the hospitals.

A decision has also been taken to install CCTV cameras in the Covid care wards at all hospitals. The in-charge ministers will be able to monitor the patients and health care facilities on real-time and intervene if required.

The ministers will camp at the district headquarters.

Mohinder Singh Thakur, the senior-most minister, has been made in-charge of Mandi – the chief minister’s home district where the maximum number of deaths have been recorded at Lal Bahadur Shastri Medical College, Ner Chowk (Mandi). The patients are scared to get admitted at the college. The district reported 8 deaths during the past 24 hours.

Speaker Vipin Singh Parmar will be in charge of the state's biggest district of Kangra while Suresh Bhardwaj, another senior minister and Shimla MLA, will be in-charge of Shimla.

The chief minister ruled out imposition of lockdown but not curfews in containment zones.

Data reveals that of the total 663 deaths so far in the state, 320 were recorded in November 2020. If the trend was not reversed, Himachal Pradesh could be worst affected in December and January months during snowfall.