Jairam Thakur, who was on a visit to the Kinnaur district, added that there is no violation of the border and the construction work is confined to China’s side of the border. 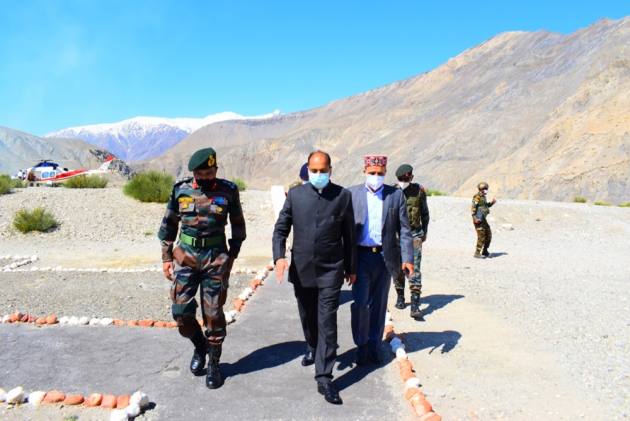 Two days after his visit to the state’s border, Himachal Pradesh Chief Minister Jairam Thakur said that China has ramped up its infrastructural project in the Tibet region that shares a border with India.

“It’s true that China is building roads and ramping up other infrastructural projects along the state’s borders in the Tibet region. It appears China is planning to set up its surveillance network at some vantage point which is located at a higher elevation so as to keep an eye on our side of the borders”, he said.

Thakur, who was on a visit to the Kinnaur district, added that there is no violation of the border and the construction work is confined to China’s side of the border.

One of India's bilateral trade routes with China is also transacted via Shipki La, an 18,599-feet high pass in the Kinnaur district. But, ever since the Indo-China clash broke in Ladakh, there has been no trade activity in the past two years.

Thakur’s sudden visit to the border, where he met top Indian army, ITBP and Dogra Scouts officials, surprised many in the state, including the opposition Congress leaders.

Thakur was quick to react and advised Congress to not speculate about the purpose of his trip as being the state’s Chief Minister it was his moral duty to reach out to the soldiers guarding the country’s borders amid a pandemic.

Thakur, however, said he will submit a detailed report to the centre since it’s not appropriate to speak about sensitive border issues. “My advice to the Congress also will be to act responsibly”, he added.

Thakur didn’t miss to recall last year’s air space violations, on April 11 and on April 20, by Chinese helicopters in Kinnaur which took place just before troop build-up at the LAC in Ladakh began.

According to sources, the Chief Minister has submitted a report to the centre about his visit to Kinnaur.

During his visit, Thakur was accompanied by cabinet minister Dr Ram Lal Markanda. Both, Thakur and Markanda, reached Sumdo, the base camp of the Indian army.

“He (Jairam Thakur) interacted with officers of the ITBP, Dogra Scouts and 15th Bihar Regiment and appreciated the role of the army personnel in protecting the frontiers of the nation”, said a government spokesman.

Questioning Thakur’s visit, Kinnaur MLA and former Deputy Speaker Jagat Singh Negi asked that when the Indian Army, ITBP and central agencies were already performing their jobs well and keeping an eye on the borders, what necessitated the Chief Minister’s visit to the borders.

“This looks more like a publicity stunt than anything else”, he said adding that “if China has done anything on its side that anyway should not concern us. We should also keep strengthening our local infrastructure, communication system and internet connectivity for the benefit of the Indian Army, ITBP and local population”.

Last year, Himachal Pradesh governor Bandaru Dattatreya had also written a letter to defence minister Rajnath Singh and had asked for improvement of the road network around the border and installation of robust communication and landing facilities.

There was also a suggestion to the defence minister to undertake confidence-building measures for the local population in the two border districts of Kinnaur (36 border villages) and Lahaul-Spiti (12 villages).