The patient's risk of post Covid complications is also addressed by this therapy, studies have revealed. 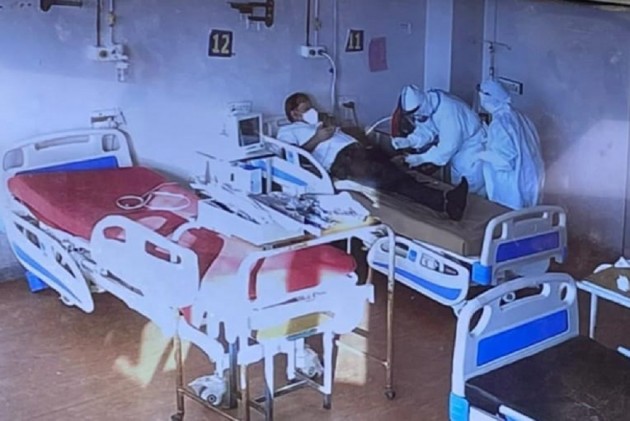 Dr Ramesh Chand, a deputy director at state government’s health department, who was tested positive three days back, volunteered- rather insisted- to be given monoclonal antibody therapy as around 211 doses of the medicine received through foreign donations were lying unused for the past two months.

Earlier, he had also taken both doses of vaccination yet got infected by the virus as he had also been travelling apart from his emergency duties at the health headquarters.

Senior Medical Superintendent Dr Janak Raj confirming the administering of the monoclonal antibodies to Dr Chand said it’s the first time that this treatment has been undertaken in Himachal Pradesh though there have been reports about the same being administered to patients in Punjab and some other states to deal with Covid 19 emergencies.

“It is given to the Covid patients during early symptoms. This helps in stopping the virus spread in the lungs and binds it to the cells. The patient is cured within 24 hours. We will conduct a second RTPCR test on Dr Chand on Monday. Thereafter we will be able to report the success for carrying it further,” Dr Janak Raj said.

Dr Chand, who has also been working as nodal officer for Covid Emergencies and handling medical supplies received from world over, said medical authorities at IGMC, Shimla, where he also remained Senior Medical Superintendent, has not done even trials locally.

“I brought-out a lot of literature and took consultancy from experts and also medical representatives of Cipla pharmaceutical company, and got the doctors convinced to try the first dose on me. Each injection costs around Rs 1.12 lakhs. The total stock we had received must be worth Rs 2 - 3 crores and may reach its expiry dates soon. Since it has come to us as a donation, we were not valuing its importance,” he told Outlook.

Monoclonal antibodies are artificial antibodies that mimic the activity of human immune systems. It is also given to patients having breathing problems and comorbidities including diabetes—who are always at risk due to Covid 19 infection.

When asked how has his body responded to the treatment, Dr Chand said, “I feel like dancing. No fever, no body aches. Pulse is normal and O2 saturation is 97.98 %. It’s miracle and I knew it works wonders. I remember how Donald Trump also got cured after this therapy.”

When contacted Amit Chauhan said the therapy has some direct benefits to the patients. It reduces the risk to the lives, cuts down hospital stay of the patients with weak immune system or lacking own natural antibody response. Even the need of oxygen and ventilator support is also reduced significantly. The patients can be discharged in health condition within three or four days.

“Antibody cocktail treatment is working well and some of the states like Rajasthan have placed their own orders after having consumed supplies received through foreign donations,” said Chauhan.

The patient's risk of post Covid complications is also addressed by this therapy, studies have revealed.