The bypoll jolt to the Jairam Thakur government may end up jeopardising the BJP's dream of retaining the state in the 2022 Assembly elections. 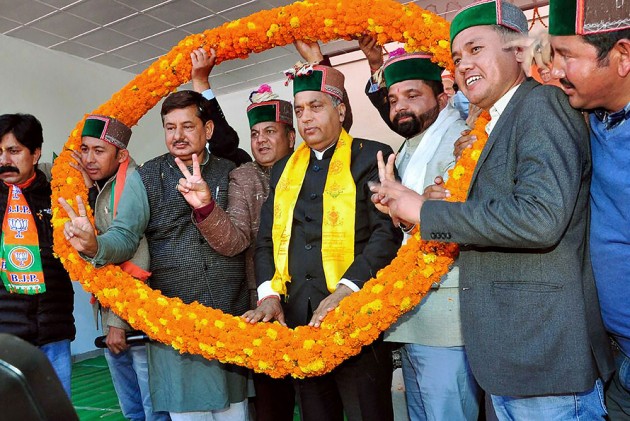 In less than four years after losing power to the BJP, the Congress seems to be on a comeback path in Himachal Pradesh. It has registered a decisive win in the four bypolls held in the state on October 30 which included a Parliamentary seat in Mandi in the home district of Chief Minister Jairam Thakur and three assembly constituencies in districts of Shimla, Solan, Kangra, Kullu, Mandi, Kinnaur, Lahaul-Spiti and Chamba .

The favourable outcome for Congress could not be without political significance for the state, which traditionally alternated between Congress and BJP every five years. The verdict is also a clear sign of the BJP's diminishing popularity graph, barely two years after it had swept the Lok Sabha polls in 2019 with the highest-ever vote share of 69.11 per cent.

Two-time former MP Pratibha Singh’s victory at Mandi in the absence of her husband Virbhadra Singh, a six-time former Chief Minister, is an embarrassing point for the BJP since it is the home district of CM Thakur. The latter had made the bypoll a matter of his own prestige here and the results may harm his credibility and give further fuel to his detractors.

The most stunning blow to the BJP came in Jubbal-Kotkhai , an assembly constituency barely a few kilometres away from Shimla. The BJP candidate Neelam Saraik lost her security deposits as she could poll just 4.67 percent votes (2,644) since Chetan Bragta was number two with a 41.8 per cent vote share out of total of 55,717 polled votes.

The outcome is bound to impact Thakur's political future with the bypolls being seen by many as the ‘semi-final’ ahead of next year’s assembly polls.

The blow could even shake up the confidence of the party's high command, especially with Himachal-origin leader J P Nadda heading the party and playing a key role in the party's decision-making process.

According to critics, what really queered the pitch for the incumbent BJP was not just the issue of rising prices – Congress’s biggest poll weapon against the ruling party this time - but its alleged ‘arrogance of power’.

The willful denial of tickets to potential winners in all four constituencies on flimsy grounds , taunted as ‘internal surveys’ and several BJP’s power centres working for cross purposes also proved fatal for the party.

One of the worst miscalculations for the BJP was denying a ticket to Chetan Bragta in Jubbal-Kotkhai , the stronghold of his father Narinder Bragta. The son had no option but to contest as an independent candidate, scoring high votes though eventually losing to the Congress’s Rohit Thakur, grandson of former Chief Minister Ram Lal Thakur, by more than 6,100 votes .

Bragta, initially tipped for the party ticket after the demise of his father – was declined the ticket on the pretext that the party didn't want to field a ‘dynast’. Narinder Bragta's single-handed hard work had wonhe BJP a significant foothold in the Congress stronghold

While the BJP's larger plan was to attack Pratibha Singh in Mandi and Congress for promoting dynasty politics, the tactic seems to have backfired.

"The Congressmen fought their battle unitedly to show the BJP its place, expose its lies and encash on issues of rising prices, unemployment and above all the BJP's autocratic rule. The people were fed up with the wrongdoings of the BJP.  They voted for us because they trusted the Congress," Asha Kumari, a six-time Congress legislator and currently the senior-most MLA in the state assembly, told Outlook.

The Congress's coming back to the reckoning is being seen as quite creditable for the party which only sometime back had lost towering figures like Virbhadra Singh, who been a rallying point in most polls and former minister G.S Bali, another leader who had the potential to turn the tables on the BJP.