Lahaul-Spiti police issued an advisory asking people to avoid travel in the high risk snow-bound area in next 24 hours. 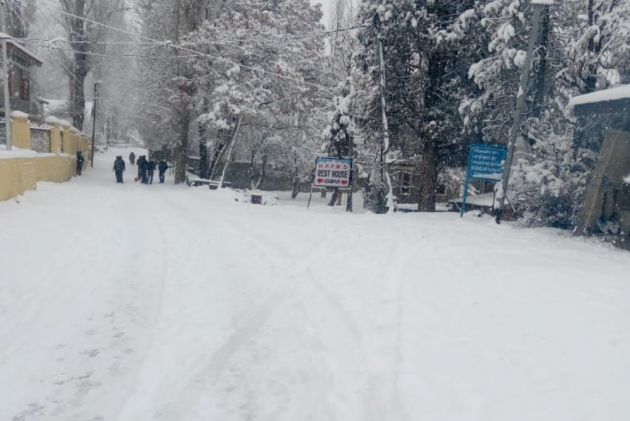 Even though it was long anticipated in the mid-hills and lower plains of Himachal Pradesh, abrupt change in weather followed by heavy downpour threw life out of gear as higher reaches of the state received moderate to heavy snowfall on Tuesday.

Fresh spell of snowfall in Lahaul-Spiti,Manali, Narkanda, Kufri, McLeod Gunj and other hill destinations brought the temperature down and it also caused disruption of the roads and Highways in several areas of the state.

The world famous Rohtang Tunnel, a major tourist attraction, was shut down for the tourists. Later, the Lahaul-Spiti police issued an advisory asking people to avoid travel in the high risk snow-bound area considering the weather department's  warning of more snowfall and rain in next 24 hours.

Shimla, where the tourists and locals have witnessed massive snowfall, experienced incessant downpur as nearby tourist spots of Kufri, Fagu and Narkanda experienced snowfall.

Snow revellers thronged The Ridge in Shimla during the day with a hope to witness the white charm. They are now expecting the year’s first good snowfall in the next 12 hours as the Meteorologocal department hinted.

The district Disaster Management Authority at Lahaul-Spiti has sought cooperation from the local panchayats, NGOs and trekkers and other people to ensure that people don’t take the risk of movements as it could lead to unforeseen accidents and hold-ups in the snowfall or even glaciers.

The India Meteorological Department (IMD) on Tuesday issued a fresh alert for rains and snow for Himachal Pradesh as all the higher mountains in Lahaul-Spiti, Kullu, Kinnaur, Shimla, Sirmaur, Chamba and Mandi have received snowfall in last 24 hrs.

"Keylong recorded the lowest temp at -4 degree celsius. A yellow warning for rainfall is issued in the state for next 48 hrs," said Surender Paul, IMD Head, Himachal Pradesh.

In a bulletin issued earlier in the day, the weather forecasting agency said that under the influence of the intense western disturbance affecting the Western Himalayan region, heavy rain and snowfall is likely to occur in the districts of Chamba, Kullu, Lahaul and Spiti and Kinnaur on Tuesday and heavy rainfall/snowfall is likely in the districts of Chamba, Kangra, Kullu, Mandi, Shimla, Lahaul and Spiti and Kinnaur on Wednesday.

The department further said that another intense western disturbance is likely to affect northwest India from Thursday night which may lead to heavy rain and snowfall in the districts of Chamba, Kangra, Kullu, Lahaul and Spiti and Kinnaur on 8 January.

Several roads in the interiors of Shimla have got blocked due to snowfall .Around 25 bus routes have been disrupted because of the snowfall

Chief Minister Jai Ram Thakur directed the authorities responsible for maintenance of the electricity supply, drinking water and transport to ensure that the people were not inconvenienced during the snowfall. Steps must be taken to restore the supplies and road communication immediately after the snowfall.

Though , the fears of Covid have started gripping the tourist towns of Shimla and Manali but the hoteliers see chances of fresh footfall following snowfall .