Nearly a dozen films from the Himalayan states will be screened during Himalayan Film Festival in Leh. 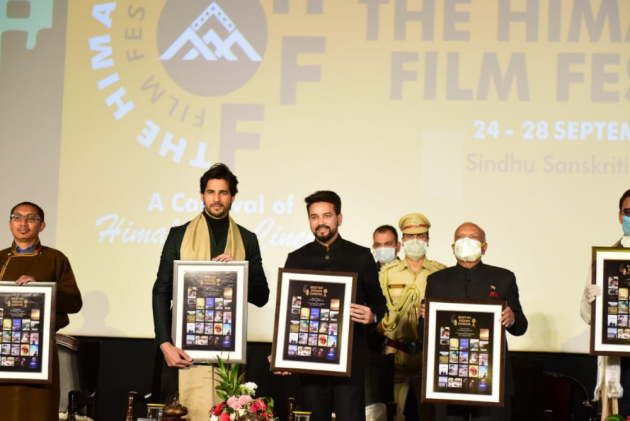 Popular films from 12 Himalayan states will be screened in the first edition of the Himalayan Film Festival with the inaugural ceremony held in Leh on Friday.

The officials said popular films from the Himalayan states including Assam, Sikkim, Manipur, Mizoram, Tripura, Meghalaya, Nagaland, Uttarakhand, Arunachal Pradesh, Himachal Pradesh and Ladakh will be showcased during the festival.

The five-day festival, which will be held at Sindhu Sanskriti Kendra Leh, will conclude on September 28. The film festival is being organised by the administration of the union territory of Ladakh in collaboration with the Directorate of Film Festivals, Ministry of Information and Broadcasting, Government of India.

Minister of Information and Broadcasting Sports and Youth Affairs, Govt. of India, Anurag Singh Thakur will the chief guest.

Officials said the main guests will be film-maker Vidhu Vinod Chopra and film critic Anupama Chopra. Chopras will be interacting with the budding filmmakers of the region also. The five-day film festival is open to everyone. The festival organisers have received 100 entries including 30 short films from Ladakh. Officials said selected short films, approved by a jury of top filmmakers, will be screened during the festival.

Sidharth Malhotra’s latest release “Shershaah” will be screened at the opening ceremony of the festival. Officials in Leh said this is the first time that Shershah will be theatre released. Malhotra will be present during the screening of the film.

The Shepherdess of the Glaciers, an award-winning film by Stanzin Dorjai Gya and Christiane Mordelet, a first of its kind from Ladakh which has received several national and international awards will be also shown in the inaugural session. The Shepherdess of the Glaciers is about the life of Tsering, a shepherdess from the far-off village of Gya which is 70 km from Leh, in Ladakh and has been shot at an altitude of 6,400 ft over a span of many years.

Masterclasses on editing by Priya Krishnaswamy, wildlife by S. Nallamuthu, direction by Nila Madhab Panda and in acting by Phonsok Ladakhi aiming to impart necessary skills and networking opportunities to budding as well as established filmmakers will also be organized during the festival.