Himanta Biswa Sarma Takes Oath As The CM Of Assam, Here Are The Names Of Other Ministers

Former chief minister Sarbananda Sonowal proposed his name which was seconded by Dass and Nandita Garlosa. 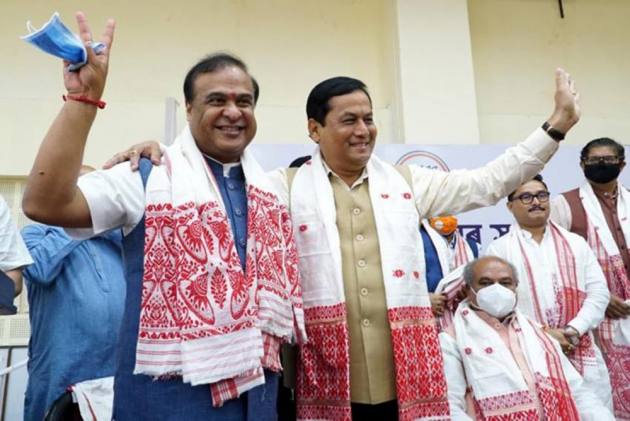 The BJP's lead strategist in northeastern states and senior leader Himanta Biswa Sarma, who was on Sunday elected as the leader of the newly-elected MLAs of the party, has taken his oath as the 15th Chief Minister of Assam at noon today at the Srimanta Sankardeva Kalakshetra. He is being accompanied by his mother, wife, son, and daughter for the ceremony.

Sarma had called the governor on Sunday evening after being unanimously elected as the leader of the BJP legislature party ending week-long suspense over the top seat since results were declared on May 2. He submitted a list of elected legislators owing allegiance to the NDA, which includes the Asom Gana Parishad and the United People’s Party, Liberal.

Former chief minister Sarbananda Sonowal proposed his name which was seconded by Dass and Nandita Garlosa.

There are several new faces in the ministry including Ranjit Dass, state president of the BJP, and Urkhao Gwra Brahma from UPPL.

BJP national president J P Nadda was among the invitees to the swearing-in besides chief ministers of Mizoram, Nagaland, Arunachal Pradesh, Manipur, Tripura, and Meghalaya.

Sarma also called up Assam Congress president Ripun Bora, AIUDF chief Badruddin Ajmal and Bodoland People’s Front president Hagrama Mohilary inviting them after several months of a bitter war of words in the run-up to the high-voltage elections, which eventually the NDA won with 75 of the 126-seat assembly.

On Saturday, Sarma and Sonowal were summoned by the BJP leadership in Delhi to thrash out the chief minister issue. Nadda, Amit Shah, and B L Santosh had separate meetings with both and then another together after which Sarma said the legislature party meeting would decide.