A pro-Kannada outfit has warned of agitations from October 1 if the Centre 'imposes' Hindi in Karnataka. 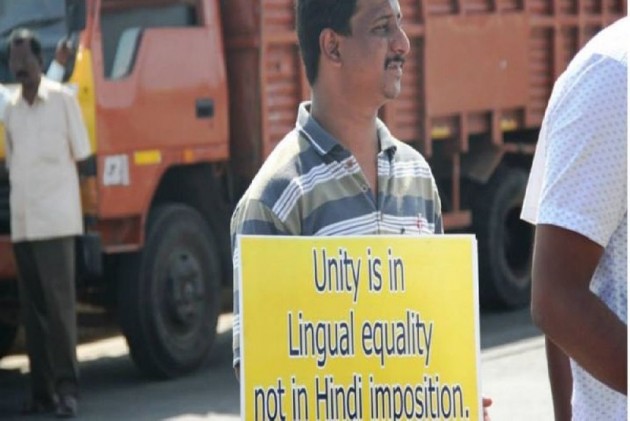 'Hindi Diwas' took a political twist in Karnataka with the Congress and JD(S) leaders terming it as an 'imposition' of the language.

However, the ruling BJP batted for learning it just like Kannada and appealed to the people of the state not to treat it as an imposition of a language.

The reaction of the parties comes in the wake of Union Home minister Amit Shah pitching for a common language for the country and saying it was Hindi which was spoken the most and can unite the whole country.

Tweeting in Kannada, former chief minister Siddaramaiah said, "The lie that Hindi is a national language should stop. Let it be known to all that it is just like Kannada, one among the 22 official languages of India. You cannot promote a language by spreading lies and fake information. Languages flourish by affection and respect for each other."

However, the Congress leader reminded that he was not opposed to Hindi but the attempt to impose a language.

"Languages are the window of knowledge. It should be nurtured by love and not by force. I too oppose the Hindi Diwas celebrations," he tweeted.

JD(S) leader H D Kumaraswamy sought to know from Prime Minister Narendra Modi when 'Kannada Diwas' would be organised across the country.

"The Central government is celebrating 'Hindi Diwas.' When will you celebrate Kannada Diwas Mr Narendra Modi, which is also an official language like Hindi? Remember that the people of Karnataka are part of the federal system," Kumaraswamy tweeted.

On the other hand, Primary and Secondary Education Minister S Suresh Kumar pitched for learning Hindi.

"We learnt Hindi watching former prime minister Atal Bihari Vajpayee's lecture in chaste Hindi. He was the first leader from India who gave his lecture in Hindi," said the minister speaking at the Hindi Diwas and organised by the district administration at Chamarajnagar.

The minister said Hindi should be given equal place just as Kannada.

He also assured the Hindi teachers of addressing their grievances.

Siddaramaiah had on Friday cried foul over not holding the bank clerk recruitment exam, conducted by the Institute of Banking Personnel Selection, in Kannada.

Meanwhile, a pro-Kannada outfit has warned of agitations from October 1, if the Centre 'imposes' Hindi in the state.