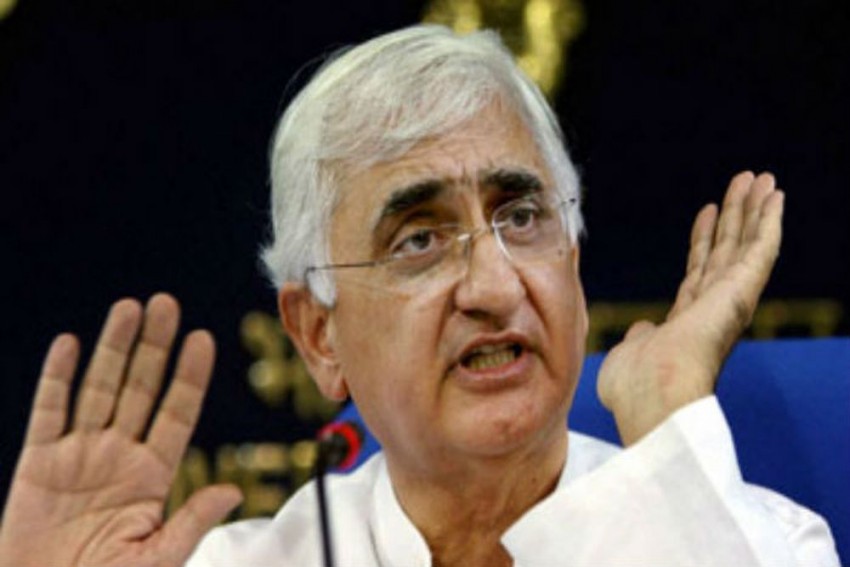 Congress leader Salman Khurshid's house in Uttarakhand’s Nainital was vandalised on Monday amid the row over his controversial  remarks on 'Hindutva'.

In his recent book, Salman Khurshid drew a comparison between Hindutva and terror outfits like the ISIS.

According to initial reports, some people damaged windowpanes and set fire to a door at the house in Bowali police station area, Nainital (City) Superintendent of Police Jagdish Chandra said.

Nobody was hurt in the house where only caretakers stay, the SP said.

Khurshid posted video clips on social media in which some people appear to be burning his effigy and shouting derogatory slogans against him and the Muslim community.

One slogan said “the traitors” should be shot. Another said the country did not belong to the “mullahs” but to “Veer Shivaji”. The mob was also heard shouting, "Jai Jai Veer Bajrangi Jai, Jai Shri Ram."

The attack came days after the former Union minister launched his new book, “Sunrise over Ajodhya: Nationalism in Our Times”, drawing much criticism from the BJP and right-wing organisations.

"I hoped to open these doors to my friends who have left this calling card. Am I still wrong to say this cannot be Hinduism," he asked on Facebook while posting pictures of arson at his Nainital home.

"So such is debate now. Shame is too ineffective a word. Besides I still hope that we can reason together one day and agree to disagree if not more," he said in another post.

“Salman Khurshid is a statesman who has done India proud in international forums and always articulated a moderate, centrist, inclusive vision of the country domestically. The mounting levels of intolerance in our politics should be denounced by those in power," he tweeted.

Apart from the BJP, Khurshid faced criticism from his own party leader and former Leader of Opposition in Rajya Sabha Ghulam Nabi Azad for comparing Hindutva with terror groups.

"The comparison is factually incorrect and an exaggeration," Azad had said.

But, addressing a party workers' training programme in Wardha on November 12, Congress leader Rahul Gandhi argued that Hinduism and Hindutva are different.

“Can these be the same thing? Why do you use the word Hinduism, why not just use Hindutva if they are the same thing? They are obviously different things,” Gandhi said, without mentioning the book.

“Is Hinduism about beating a Sikh or a Muslim?” he said, suggesting that Hindutva may advocate violence but Hinduism doesn’t.