Hindutvawadi Bathes Alone In Ganga But A Hindu Will Bathe With Crores Of Others: Rahul Gandhi Targets PM Modi 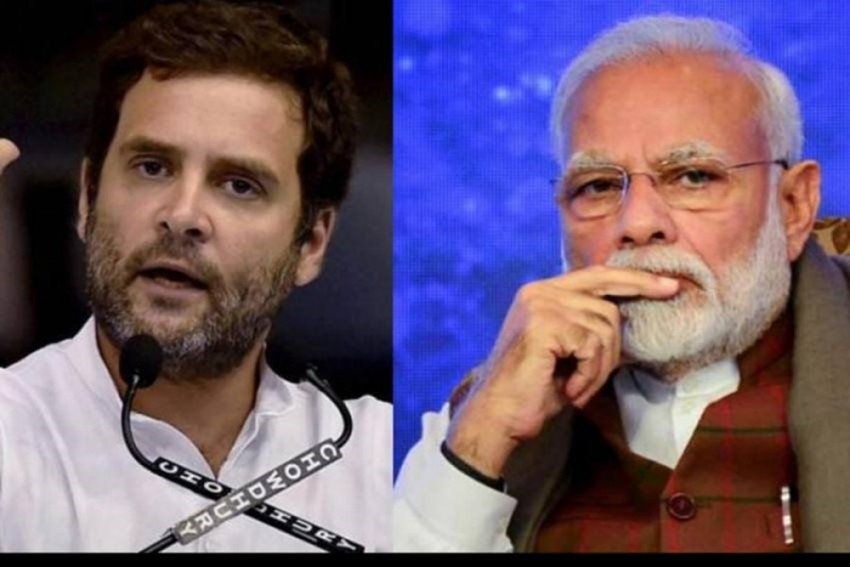 "Hindutvawadi bathes alone in Ganga, but a Hindu will bathe with crores of others," Gandhi said at a public gathering, taking a swipe at the prime minister who recently inaugurated the Kashi Vishwanath Corridor in Varanasi after taking a holy dip.

"Narendra Modi Ji says that he is a Hindu, but when did he protect the truth.... (Is he) Hindu or Hindutvawadi?"  Gandhi said at a public gathering, raising the issue of jobs, China's incursions and farm laws.

Mahatma Gandhi was a Hindu as he fought against injustice while a Hindutvawadi is like Nathu Ram Godse who used to lie, spread violence and had assassinated Mahatma Gandhi, the Congress leader said.

"A Hindu never weeps but Hindutvawadis cry. When Nathuram Godse was hanged, he cried bitterly," he said.

The former Congress president and his sister and party leader Priyanka Gandhi Vadra took out a padyatra (foot march) from Jagdishpur to village Harimau where Rahul Gandhi addressed a public meeting.

"There is a lot of talk about religion in the country, about Hindu religion. The fight in India today is between Hindu and Hindutvawadi. On one side are the Hindus who tread the path of truth, and on the other side are Hindutvawadis, who spread hatred and can do anything for snatching power," Rahul Gandhi said.

Speaking about his association with Amethi, Rahul said "A few days ago Priyanka came to me and she told me that I have to go to Lucknow to hold a meeting. I told my sister that before going to Lucknow, I want to talk to my family first, so I am here today.

"In 2004, I came into politics and fought the first election here and you taught me a lot. I learned to work from you and in a way you showed me the way."

Talking about the prevailing conditions in the country, he said, "There are two big questions before the country today- unemployment and inflation - but neither the chief minister nor the prime minister answers questions about them."

"Modi ji will sometimes take a bath in the Ganges, sometimes go to Kedarnath. Today in Ladakh, the Chinese army is sitting inside India and has snatched land from India and made it its own, but the prime minister neither said nor did anything about it," he said.

The Congress leader again accused Modi of working for the capitalists and alleged that demonetisation, GST and the three agriculture laws were all brought for their benefit.

"Modi brought three black agricultural laws and first said that they were in the interest of farmers and after one year when the farmers of India stood up and agitated, the prime minister said that 'I apologise, I have made a mistake''," Rahul Gandhi said.
"I asked a question in Parliament that seven hundred farmers were martyred did you give them compensation, I got the answer that not a single farmer was martyred, " he said.

Rahul Gandhi said they have family ties with Amethi and "this relationship will never break".

"A Hindu spends his entire life finding, understanding and fighting for truth. Hindu faces his fears and never lets them turn into hatred, anger or violence, but Hindutvawadi only indulges in politics of lies and has nothing to do with the truth. He only uses lies to snatch power," Rahul Gandhi said.

Rahul Gandhi was a Member of Parliament from here for 15 years. He is visiting Amethi for the second time after losing the seat, which had been a  pocket borough of the Nehru-Gandhi family, by 55,120 votes to BJP's Smriti Irani in the 2019 Lok Sabha elections.

There are five assembly seats in Amethi parliamentary constituency. Out of these, Amethi, Jagdishpur, Salon, Tiloi are held by the BJP. The Gauriganj seat is with the Samajwadi Party. The Congress is trying to regain its turf in Amethi and Uttar Pradesh in the upcoming assembly polls.

The leaders were taking part in the 'Jan Jagran Abhiyan-Bhajapa bhagao, mehengai hatao pratigya padyatra' organised against the policies of the Modi government.

Congress workers accorded a warm reception to their leaders. Cutouts and reception gates were set up at various points to welcome them.