Himanta Biswa Sarma took oath as the 15th Chief Minister of Assam along with 13 members of his cabinet on Monday after he was elected unanimously by the BJP Legislature Party, which met in Guwahati on Sunday. 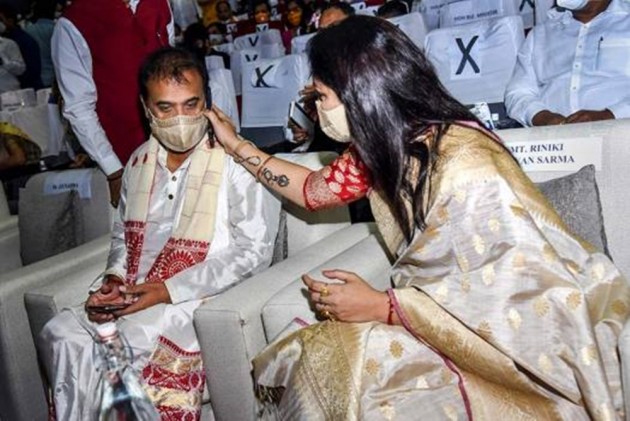 “His dream has come true,” Riniki Bhuyan Sarma said after her husband Himanta Biswa Sarma was sworn in as the 15th chief minister of Assam today.

“I still can’t believe it. I’ll take a couple of days to let it sink in,” she said.

“Yesterday, he returned home and just said ‘designate chief minister’. I looked at him and asked, who? “Me,” he said. For a while, I thought he was pulling my leg,” Riniki said at the Srimanta Sankardeva Kalakshetra in Guwahati, where the swearing-in ceremony was held.

She recalled, since they had met, it was only politics on his mind.

“I was 17 and he was 22 when we first met and he would only speak of politics and how one day he wanted to become chief minister,” she said.

After it became clear yesterday that he was going to be the chief minister, even he was probably a little surprised.

“I didn’t realize I would be entrusted with such a huge responsibility,” Riniki quoted him saying. “We finally went to bed at around 5.30 am today, as he finished his work only after 4 am, which is beyond the normal. He has taken his responsibility seriously… his dream has come true,” she said.

Sarma’s mother Mrinalini Devi said yesterday’s was the best Mother’s Day gift that her son could have given her. “I am so happy,” she said adding,” the entire day yesterday, I just kept recollecting his days of growing up…I pray to God for his blessings so he can serve humanity well,” she said.

Sarma was elected as leader of the BJP legislature party yesterday paving his way for coronation as chief minister.