'History May Repeat Itself In 2022', Fear Doctors Amid Omicron Surge

2021, for most, was a struggling event to save our loved ones from the Covid-19 second wave. And in 2022, doctors desperately hope that history does not repeat itself. 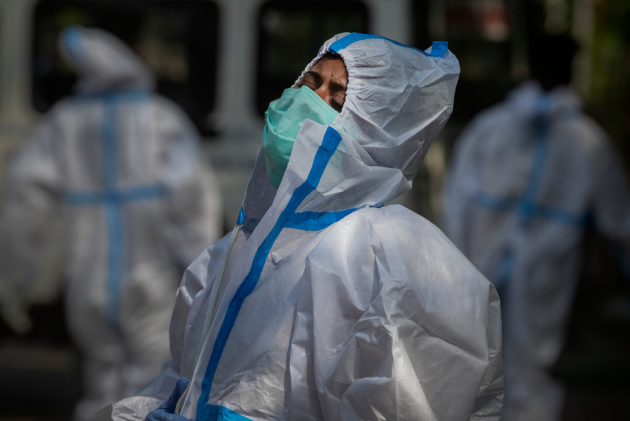 2021, for most, was a struggling event to save our loved ones from the harrowing Covid-19 second wave. And for doctors and health workers, it was probably worse. In 2022, doctors desperately hope that history does not repeat itself.

“The thought that history can or is waiting to repeat itself with the sudden surge in Omicron cases, is what really scares us,” says Dr Anujeet Paul from Mahatma Gandhi Medical College and Research Institute Hospital, Pudducherry.

In May 2021, India faced the brunt of the deadly wave that claimed thousands of lives, draining the healthcare system as it grappled with a scarcity of beds and paucity of resources. For doctors clad in layers of PPE kits, times were “harrowing and shattering”.

“Pathetic, we were absolutely shattered. The second wave was much more disastrous than any of us could have ever imagined during the first Covid wave. While dealing with a rising death toll, we probably stopped caring about the effect it was having on our mental health,” says Dr Poulami Ghosh (MBBS), Resident Medical Officer, Anandalok Hospital, Kolkata.

With India touching over 1,600 Covid-19 cases, and over 1,200 Omicron cases, at the doorstep of January, doctors fear that “history is waiting to repeat itself”. And yes, they are tired and wary.

Will history repeat itself?

“History can or is waiting to repeat itself,” feels Dr Anujeet Paul. He also adds that although the world “understood” so many facts about Covid-19, and despite so many restrictions and policies to curb the spread, the world is back to square one.

“We are repeating a cycle but we are being as oblivious as we were during the second wave.The government was largely responsible for the severity with which the second wave struck us, and the possibility of Omicron hitting us is just as real,” says Dr Arjun Talpatra, MD Anaesthesiology, postgraduate, Kasturba Medical College, Manipal, for whom the second wave was one of the most challenging times to pull through, mentally.

“Hearing the news of your colleagues and acquaintances falling sick every day was really scary. The biggest fear was for our loved ones back home and not being to do anything to protect them,” recalls Dr Talpatra.

For Dr Mausumi, Gandhi Hospital, Secunderabad, the second wave was the most exhausting time to survive.

“I belong to the ENT (ear, nose and teeth) speciality and I remember for three continuous months we worked 12-14 hours every day trying to take care of patients diagnosed with black fungus. We had a surgical drive throughout the weeks for those months,” recalls Dr Das adding, “I am afraid to imagine what a third wave has in store for us, after all this time”.

Other pressures that the doctors dealt with

Dr Anujeet Paul highlights how the second wave saw a decreased workforce as most of the doctors were already drained out following the first wave.

“A lot of first responders of Covid-19 were interns, resident doctors and resident medical officers. Due to the ensuing lockdown, many entrance exams for the residents were postponed. So one batch passed out while another batch was yet to take the exam,” he says.
From May 2021 to date, all hospitals across India are functioning at about 66 per cent capacity because one-third of the resident pools have left and there is no one to replace them, according to Dr Anujeet Paul.

Dr Mausumi also points out that how their academics suffered due to the Covid second wave, “We have not got enough opportunities to learn, exams have been postponed so many times, we have still not received the last batch of juniors yet. The entire system is functioning with two years of post-graduates. Imagining a third year of the same experience just makes me anxious and fearful of the future,” she adds.

The ground rules for prevention and spread still remain the same -- it’s all about social distancing and masking up, said the doctors. “Don't repeat your mistakes, because we saw how the virus can shatter us. Be more vigilant. Wear a mask, always. Follow basic hygiene because Beating Covid isn't that easy,” says Dr Talpatra.

Dr Mausumi mentions how adhering to the basic steps -- avoiding gatherings in the festive season, sanitising properly, getting early checkups and self-quarantine -- could save the world and the healthcare sector from plunging into another crisis.

Dr Anujeet Paul further urges the general populace to get vaccinated which will reduce the severity of infection. He adds, “If you have been vaccinated then please look out for booster shots, which are being rolled out in step. Keep following the basic Covid-19 norms we have in place since 2020.”

Is the healthcare sector at risk of burnout?

“To say that the healthcare system is better equipped or not, is a difficult part to tread on,” says Dr Anujeet Paul.

The healthcare system in the country is not uniform, certain states and cities definitely have it better than the rest and it is solely because of the poor healthcare infrastructure the country offers. “But as far as the third wave was concerned, a major section of the healthcare structure is not well-equipped to deal with it,” he adds.

Healthcare in India has always been ignored and less-prioritised, opines Dr Talpatra.

“India's healthcare sector was not even strong enough to withstand one more wave. Here, more importance is given to ‘babas’ (saints) and quacks than evidence-based medicine. There has been no strengthening of healthcare despite its poor foundations being exposed. Another wave might just damage it beyond repair,” says Dr Talpatra.

Agreeing on the same line, Dr Poulomi says, “Every similar wave, in present or in future, will keep exposing the inadequacy of our healthcare system starting from logistic failure to the dearth of adequate beds and poor staff-patient ratio.”

However, for Dr Mausumi, the situation appears to be different. “Our healthcare system has pulled through two waves so far, and by now we have brought in numerous improvements in the system, and I hope that we are better equipped to deal with the third wave in comparison to the past two times,” she adds.

While the country was going through two deadly waves, doctors were struggling with a sequel of Covid-19.

For them, the second wave was a much more distressing experience, where they struggled to find an outlet to distract from the demands of the job.

“We had no outlet, could not go to the comfort of home for months. We were just surviving.”