Home Too Far: Unable To Register Online, Migrants In Delhi Left In The Lurch

Many migrant workers are at a loss as to how they will be able to get a seat on a Shramik Train or a bus to go back to their native states. 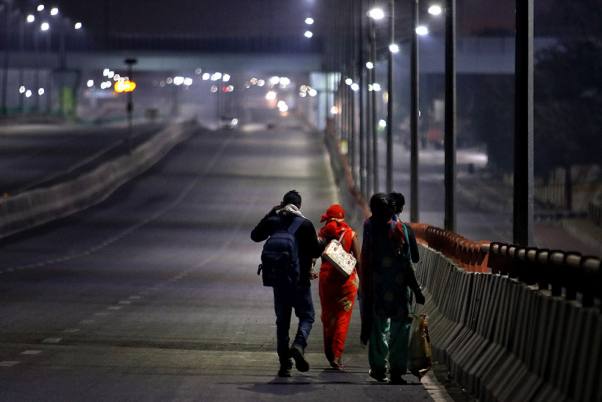 Fifty-year-old Ashok Kumar Ray has been desperately trying to return to his village in Sitamarhi district of Bihar. His father died of cancer on May 8. Ray, a daily wage worker, was hopeful that he would finally be able to go back after the government announced it would run special trains for stranded migrant workers. But it’s still a long way home for him.

From May 7, the government started operating Shramik Special Trains to ferry migrant workers across the country to their native places. Centre’s announcement gave hope to millions of workers stranded across the country. However, glitches in the registration process and lack of transparency has cast a shadow on their chance to return home.

Ray has been running pillar to post trying to get home, but he cannot even register on the Delhi government’s portal for migrant workers as it has been dysfunctional for quite some time.

“I have gone to the police, the district magistrate’s office and even the New Delhi station to find a train back home. But nobody helped me. The DM said he can give me an e-pass if I arrange a vehicle to travel. But how will I rent a car? I cannot afford it in my dreams,” Ray says. He even managed to get a letter issued by his village Panchayat confirming his father’s demise in absence of an official death certificate. But it did not help his case.

“Be it the Delhi government or Bihar, they are not helping us. I have no money left and have borrowed to buy ration,” he says, underlining that all he wants is to go back to his family.

When asked why he did not avail the Delhi government’s schemes for ration and food for the poor, he said nothing was available where he was staying in Nabi Karim area of northeast Delhi.

Many migrant workers are at a loss as to how they will be able to get a seat on a Shramik Train or a bus to go back to their native states. People from Bihar are facing a double whammy — they cannot reach anyone from their state government authorities to help them out while the Delhi government’s online portal for registration remains dysfunctional.

The AAP-led government in Delhi has currently suspended its online registration on the Delhi Urban Shelter Improvement Board’s (DUSIB) website as it decided to first transport the migrant workers who are staying in the shelter homes.

“They do not even have a place to stay. So, transporting them is our priority. After we have sent back those living in shelter homes, which is phase one of the process, we will restart the online registration,” Delhi Labour Minister Gopal Rai’s office told Outlook.

However, many migrants staying outside shelter homes continue to live in deplorable conditions. Bablu Kumar, who used to work as a tailor before the lockdown, is stranded within an 8x10 ft room with five other people at Nanak Basti in Gandhi Nagar. He has repeatedly tried to register himself online for his return, but it has not worked out.

“I used to earn around Rs 12,000 per month before the lockdown. I would send back eight thousand rupees home and live on the rest. Now, there is no work. My employer is gone. If I can go back home, I will till the land and at least have something to eat and feed my family,” Kumar says. Hailing from Bihar’s Sitamarhi district, Kumar is the sole earner in his seven-member family. They have a small farmland in their village but the crop was destroyed this year due to heavy rains.

Sahil Jain, a social worker who is helping Kumar and his fellow workers with ration, said they have a list of people who need to go back to Bihar but it has been nearly impossible to reach the District Magistrate or nodal officer in this regard.

“These people don’t even know how to go online and register themselves. Even if we are trying to help, the portal isn’t working. The DM isn’t reachable. The only way to transport them is if we can arrange a vehicle. It’s easier to get an e-pass to travel if you have a vehicle,” Jain said.

Till now, five shramik trains have run from Delhi to Madhya Pradesh and Bihar. The government is making arrangements for 35 more trains to Bihar and pay for the workers’ train fares, the labour department said.

The Nitish Kumar government does not have an estimate on how many migrants have chosen to come back home but there are some figures available. Until May 10, 1.14 lakh people had returned to Bihar through 96 special trains. Between May 11 and May 17, 2.5 lakh others are expected to reach the state. Some estimates say there are around 30 lakh migrant workers who hail from Bihar and are staying in other states across the country.

It is a huge challenge for the Bihar  government as the state’s health sector is ailing and the inflow of migrants may pose a huge risk of rise in Covid-19 cases. A three-week quarantine has been mandated for all the workers returning to the state. Bihar is also the poorest state in India with the lowest per capita income.

A group of researchers and activists that has been helping the migrant workers on different fronts sent a letter to the Home Ministry on May 11 pointing out the major issues. The letter said that different states have different requirements on their online registration forms along with difficult process for uploading photos and scans of IDs in various file formats.

Asking for transparency in train schedules, passenger lists and waiting lists, the letter points out that after registering on state portals, like that of Jharkhand, migrant workers did not receive any confirmation. “For those who successfully register, there is no tracking mechanism for them to know about their own application status. Policies being followed to prioritise selection of travelers are not transparent.”

It also demanded the strengthening of an offline procedure of registration of migrants and standardization of the process.

The online process is difficult to even access for many of the poor people.

Kumar, a rickshaw-puller from Bihar living near GB Road in Delhi, says he is sustaining himself solely on the food provided at relief centres. Kumar doesn’t have a smartphone and internet access; he wants to return to his village. The only option left, he thinks, is walking home.