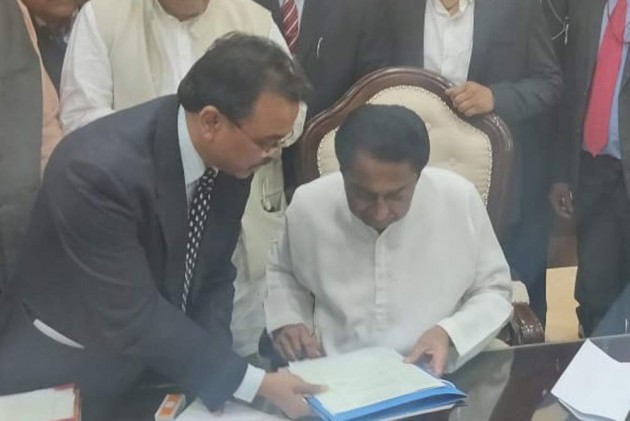 "The Madhya Pradesh government hereby takes the decision of waiving of loans taken by farmers up to Rs 2 lakh from nationalised and cooperative banks," read the letter signed by Rajesh Rajora, Principal Secretary, Department of Agriculture, Horticulture and Food Processing.

The promise for farm loan waiver was made by the Congress during election campaign in the state.

After Nath signed the relevant file, Rajesh Rajora, Principal Secretary, Farmers' Welfare and Agriculture Development Department, issued an order in this regard.

The order stated, "Madhya Pradesh Government has taken a decision to write off short-term crop loan of eligible farmers up to the limit of Rs two lakh, as on March 31, 2018, from nationalised and cooperative banks."

Addressing a public rally on June 7 at Pipliya Mandi in Mandsaur district, Gandhi had announced his party would waive farm loans within 10 of coming to power in the state.

"Here Kamal Nath (MP Congress president) and Jyotiraditya Scindia (the state Congress poll campaign committee chairman) are sitting. The day the Congress comes to power in MP, count 10 days, I say with guarantee that farmer loans will be waived within 10 days. It won't take even the eleventh day," Gandhi had said at the rally.

Later, this announcement was included in the Congress manifesto, titled `Vachan Patra'.

The Congress president had reiterated the farm loan waiver promise repeatedly during the campaigning for the November 28 assembly elections.

Six farmers were killed in police firing at Pipliya Mandi during an agitation in June last year.

The Congress won 114 assembly seats and secured the support of seven more MLAs - SP (1) and BSP (2) and four independents - to cross the majority mark of 116 in the 230- member Assembly.

Nath was sworn in as the 18th chief minister of Madhya Pradesh this afternoon.

Earlier on Monday, Nath was sworn in as its 18th Chief Minister of Madhya Pradesh, bringing to an end 15 years of BJP rule in the state which had become the saffron party's stronghold.

The nine-time MP and former union Minister was administered the oath of office and secrecy by Governor Anandiben Patel at a function held at the Jambori Maidan.