Though the number of cases is close to 1,05,000, the recovery rate is 75 per cent, far outstripping the new cases. Experts even say that Delhi has managed to flatten the Covid-19 curve. 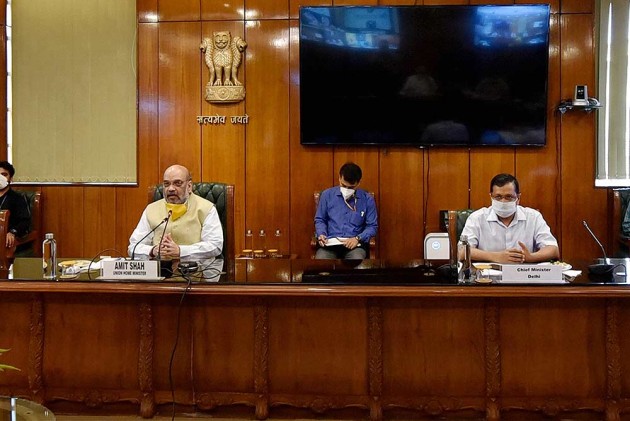 An anonymous twitter handle @libertariandesi, usually critical of the government’s policies, put out a rather approving tweet on July 9: “Amit Shah really got Delhi's COVID situation under control. We should give him credit, not Kejriwal. I urge Amit Shah to take control of Telangana for a few days to fix the COVID problem. You will be doing us Telugus from Telangana a favour.”

Home Minister Amit Shah may not be willing to take direct charge of the worsening situation in Telangana, health being a state subject, but the fact remains that his intervention in Delhi turned things around with the situation well under control now. Though the number of cases is close to 1,05,000, the recovery rate is 75 per cent, far outstripping the new cases. Experts even say that Delhi has managed to flatten the Covid-19 curve.

With the number of daily Covid-19 cases dropping below 2,500, AIIMS director Randeep Guleria, who also heads the Clinical Research Group of the National Covid Task Force, believes that Delhi may have gone over the peak and now heading downwards. Delhi deputy chief minister Manish Sisodia’s prediction, exactly one month ago, that the Capital will have more than 5,50,000 cases by July-end, is not likely to come true.

Sisodia’s statement on June 9, and the AAP government’s decision to reserve Delhi hospital beds only for Delhi residents, had created a panic situation in the capital. While Lt Governor Anil Baijal overturned the order on hospitals, the health infrastructure of the city appeared to be falling apart. It was at this point that Prime Minister Narendra Modi is believed to have nudged Shah to take charge. On June 14, Shah held a meeting with all the stakeholders including Delhi chief minister Arvind Kejriwal, ministers and officials concerned—an intervention that was surprisingly welcomed by AAP leaders, who seemed to be struggling with the pandemic.

As Shah spelt out a multi-pronged strategy for Delhi, it exposed AAP government’s weakness in the public healthcare system, something it had showcased as its biggest achievement.  And then the image of Shah visiting the LNJP hospital, run by Delhi government, showed that he was in-charge. Usually associated with strategising skills to win elections, Shah gave a peek into his administrative acumen, and that he could outsmart Kejriwal, who had won Delhi with a huge margin just a few months ago.

Here are 10 things the Delhi government did after Shah’s intervention:

A committee under the chairmanship of Niti Aayog member Dr V.K. Paul was set-up with members like Dr Guleria and Union Health Secretary Padmini Singh. In addition, Shah set up a unified command to oversee work done by local authorities, whose responsibilities were clearly delineated.

Testing has been ramped up with more than 20,000 tests being done daily. While 2.9 lakh people were tested in Delhi between April 1 and June 14, as many as 2.4 lakh people have been tested between June 15 and June 30. Cost of testing in private labs has been capped at Rs 2,400 from the earlier Rs 4,500.

The spread of the virus has been contained due to contact tracing and better management of containment zones.

Shah ordered door-to-door serological surveillance to get proper information about the spread of the virus. Several NGOs, RWAs, NSS and NCC cadets have been roped in.

There were 9,937 beds available for Corona patients before June 14. Nearly 20,000 beds have been added after that—8000 beds in 500 railway coaches, 10,000 beds in Radhasoami Ashram managed by ITBP, and 1000 in DRDO facility managed by medical staff of the armed forces and central armed police forces. Spurred by Centre’s initiative, Delhi government too has upped its game, setting up a 500-bed facility in Commonwealth Games Village.

Based on recommendations of the Paul committee, the cost of treatment in private hospitals has been capped between Rs 8000 and Rs 18,000 – the maximum being for patients requiring admission in the ICU with the use of a ventilator.

Supply of PPEs And Other Essential Medical Equipment

CCTVs for More Transparency and Accountability

Home minister ordered installation of CCTVs to ensure each Covid bed is covered. The hospitals have also been asked to put an electronic display board giving the latest number of occupied and available beds.

Cremation of people dying of Coronavirus has been streamlined to ensure that family members and relatives don’t have to run from pillar-to-post for last rites of their loved ones.

The home minister has had meetings with stakeholders of the three states, Delhi, Haryana and Uttar Pradesh to ensure a well-coordinated common strategy to fight Covid-19.