For India, Myanmar Matters. But Let's Not Forget The Cost

Endorsing a regime that is widely accused of perpetrating mass atrocities sets a dangerous precedent. 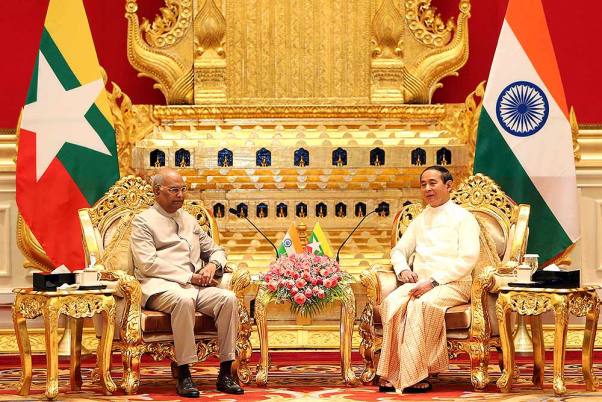 For India, liberal principles of human rights, justice and democracy practically ceased to matter in its relationship with Myanmar as far back as in the early 1990s. This happened after New Delhi flagged off its ‘Look East Policy’ to build stronger relationships with Southeast Asian countries and keep an ascendant China at bay. Myanmar, given its highly strategic position on the map, was naturally pivotal to this new approach.

Thus, the Nehruvian tradition of rooting for pro-democracy forces in the military-ruled country gave way to a more realpolitik - or ‘pragmatic’ - approach, designed to keep the Burmese establishment appeased. This meant looking away from, if not actively condoning, excesses of the junta against liberal democrats (such as Nobel Laureate Aung San Suu Kyi) and ethnic minorities. In tangible terms, this meant abstaining from or voting against UN resolutions that condemned the military regime’s human rights violations.

Even as Myanmar embarked on a process of democratic transition around 2011 (peaking in free-and-fair elections in 2015), India continued to maintain its so-called ‘pragmatism.’ It continued to vote against UN resolutions that drew attention to the military’s abuses in ethnic minority regions and the deplorable situation of the stateless Rohingya Muslim population in Rakhine State.

This only changed marginally in December 2017 when New Delhi, instead of voting ‘no’, abstained from a UN Human Rights Council (UNHRC) resolution expressing concern about military-led violence against the Rohingya in Northern Rakhine State that began after the newly-formed Arakan Rohingya Salvation Army (ARSA) attacked border police outposts on 25 August 2017.

The vote came three months after Prime Minister Narendra Modi visited Myanmar, during which he condemned the ‘extremist violence’ by ARSA but said no word on the potentially genocidal violence that the Myanmar military had unleashed on nearly the entire Rohingya population. On the other hand, Suu Kyi, who is now the State Counsellor of Myanmar, directly compared the situation in Rakhine State with Kashmir, painting both Myanmar and India as common victims of Islamist violence.

All of this despite a mountain of first-hand evidence showing that the stateless Rohingya had faced disproportionate violence in the hands of the Myanmar military and Rakhine Buddhist vigilantes starting October 2016. By mid-2018, close to 800,000 Rohingya had fled to refugee camps in southeastern Bangladesh, but not a single Indian dignitary has visited them since. Then again in March 2019, six months after a UN International Fact-Finding Mission (IFFM) released a damning report on the Myanmar military’s ‘genocidal’ violence against the Rohingya, India abstained from voting on another draft resolution at the UNHRC.

India has also maintained firm links with the security and defence establishment in Myanmar, which is dominated by the Tatmadaw (military). In the last three years, top security officials from both countries have made several mutual visits. Myanmar’s all-powerful Commander-in-Chief, Senior General Min Aung Hlaing, himself undertook two long visits to India, once in July 2017 and then in July 2019. The second visit came days after the US imposed travel restrictions on the Tatmadaw chief.

Most recently, the Indian army chief, General MM Naravane, accompanied Foreign Secretary, Harsh Shringla, on a rare politico-military visit to Myanmar, during which the latter extended a standing invitation to the Tatmadaw chief to visit Darjeeling in his next tour to India. Both armies, meanwhile, continue to conduct joint counterinsurgency operations along their sensitive border in Northeast India.

This bonhomie between the two neighbours is expected to continue as the Suu Kyi-led National League for Democracy (NLD) returns to power for a second time with an even bigger mandate. In fact, in many ways, Myanmar has emerged as one of India’s few diplomatic success stories in an otherwise difficult neighbourhood since the Modi government came to power in 2014. But at what cost?

India’s closeness with Naypyidaw might have a reasonable realpolitik logic, but is a pale reflection of how New Delhi continues to neatly decouple diplomacy and human rights concerns. In this foreign policy imagination, hard power and security interests supersede “soft” principles of statecraft - such as justice, democracy, equality and accountability.

Thus, the fact that Myanmar stands accused at the International Court of Justice (ICJ) of violating the Genocide Convention and is also simultaneously the subject of an International Criminal Court (ICC) investigation matters little to India. The diplomatic baseline in New Delhi is that it cannot afford to alienate either of Myanmar’s two power centres - the NLD government or the Tatmadaw - at a time when China is building influence in the country at lightning speed.

In many ways, the recent double visit by the Indian Foreign Secretary and army chief was New Delhi’s unambiguous indication of this. Further, India needs the Myanmar military on its side to achieve short-term counterinsurgency objectives along its Northeastern border.

But ‘human rights’ or ‘justice’ aren’t the only sacrificial lambs at the altar of India’s Myanmar realpolitik. India also stands to suffer adverse consequences in the region if it continues to ignore complex human rights situations in Myanmar, particularly the Rohingya crisis.

For one, New Delhi’s uncritical support for the NLD government and Tatmadaw has rocked its boat with Bangladesh, with Prime Minister Sheikh Hasina clearly stating on several occasions that she wants India to do more. This essentially means New Delhi should pull strings with Myanmar, using its existing goodwill and good offices, to create conditions for the safe, dignified and sustainable return of Rohingya refugees to Rakhine State.

However, a press release issued by Dhaka in July stated that India supports ‘fast’ repatriation, a claim disputed by India. In fact, critical differences between New Delhi and Dhaka over the Rohingya issue have only become sharper in the recent past. With military tensions flaring up between Bangladesh and Myanmar along their border in recent weeks, the fact that India continues to support, arm and even roll out the red carpet for the Tatmadaw doesn’t help. In doing so, it is seen by Dhaka as taking sides in a very complicated politico-military conflict that directly affects the security and territorial sovereignty of Bangladesh.

If anything, the September visit by the Indian foreign secretary to Dhaka, and reports of diplomatic frostiness that it generated, should be an indication of the unsteady ground beneath New Delhi’s feet in the Muslim-majority neighbour. Yet, just a month later, India sent a high-level double delegation to Myanmar that categorically avoided discussing the Rohingya crisis.

Lastly, India’s current ‘non-political’ or neutral approach to the Rohingya crisis - which entails sending generic humanitarian and development aid to Myanmar and vaguely hoping for “early stabilisation” of the situation - does little to actually resolve the situation on the ground. For starters, New Delhi has already made it clear that its aid money is meant for the “development of all the people in Rakhine State” and not just a select group (read: the Rohingya). Further, most of the Indian aid to Rakhine comes under what the Myanmar government calls the Rakhine State Development Program (RSDP), which barely even touches Rohingya lives.

Until Myanmar accords full political and economic rights to the Rohingya, including freedom of movement, refugees will refuse to return and the crisis will continue to simmer. If the idea is to prevent a full-blown influx of Rohingya refugees into India, then New Delhi must take a more political stand on the crisis and convince Myanmar to revisit its nationality laws and policy of persecuting the Rohingya through a host of other rules.

India should also urge Myanmar, very clearly and publicly, to fully cooperate with ongoing international probes, and simultaneously encourage it to bring the perpetrators of violence against the Rohingya to book through its own judicial mechanisms. While the Tatmadaw’s dominance in Myanmar renders domestic trials against Generals and soldiers close to limbless, India must do its bit for the record.

It is high time India looks at the big picture, beyond the limited realist arithmetic that it remains committed to at the moment. Standing behind a regime that is widely accused of perpetrating and looking away from mass atrocities of unprecedented nature, sets a dangerous precedent. For an aspiring regional power that is also openly hedging for liberal international principles of multilateralism, norms-based regional orders and inclusivity, such a precedent could soon become baggage.