The Nagaland incident has highlighted several flaws in the Armed Forces Special Powers Act (AFSPA), so much so that calls for repeal of this act are being made again. What went wrong? We explain. 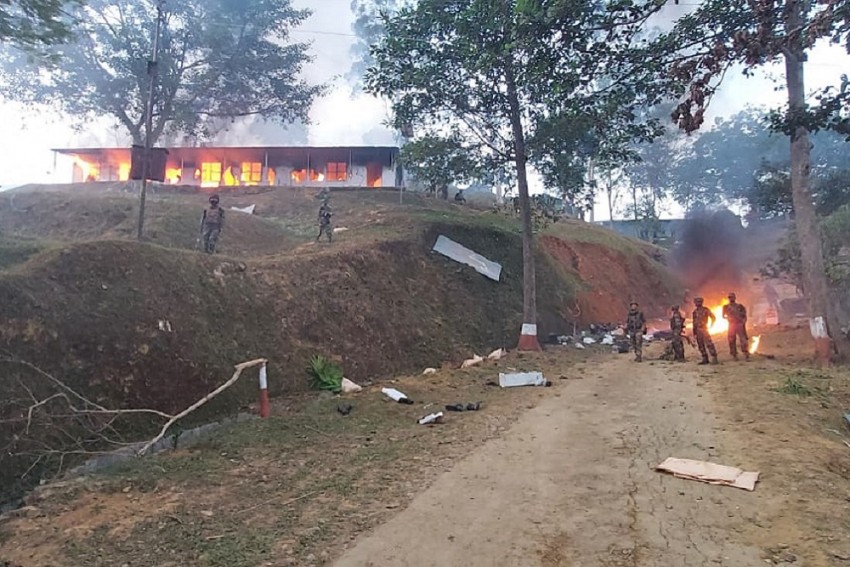 Security forces in Nagaland opened fire on civilians killing 14 and injuring 11 more in the Mon district in three consecutive incidents of firing, police said on Sunday. One soldier also died in rioting which followed.

The first firing which killed six civilians, occurred when army personnel mistook coal mine workers returning home in a pick-up van singing songs on Saturday evening, to be insurgents belonging to the Yung Aung faction of proscribed outfit NSCN (K). The security forces had earlier got a tip off about the insurgents' movements.

As workers failed to reach their homes, local youth and villagers went in search of them and surrounded the army vehicles. In the ensuing violence, one soldier was killed and army vehicles burnt down. Soldiers who fired in self-defence killed another seven civilians, said police officials.[Read more]

Nagaland home commissioner Abhijit Sinha said section 144 of the Code of Criminal Procedure has been imposed in the affected Mon district and internet services have been suspended until further orders. Local police are conducting a flag march in the area to prevent any other untoward incident, he said.

Armed Forces Special Powers Act (AFSPA), 1958 is an act of the Parliament of India that grants special powers to the Indian Armed Forces to maintain public order in "disturbed areas". The governor has the powers to declare the area within the state as a disturbed area, after which, AFSPA comes into effect. Once an area is declared such, its status can’t be revoked for another three months.

What originally started as an act to suppress the Quit India Movement in 1942 for individual states was turned into a central law in 1947 as the partition of India created violence.

Once the area is declared a 'disturbed area', the AFSPA gives the power to a number of army officers to kill people, if they think it is necessary to maintain public order and after giving due warning. Without the permission of the central government, the officer can not be prosecuted under this act.

The Nagaland police has now registered an FIR against 21 Para Special forces of the Army, alleging that the army “blankly opened fire” with the “intention to murder and injure civilians” [Read More]

In Naga People's Movement of Human Rights v. Union of India [1997] the Supreme Court upheld the constitutional validity of AFSPA. The apex court observed that there were sufficient safeguards against misuse/ abuse of powers under the AFSPA. As the evidence of widespread misuse of the act was brought up before the court, it expanded the Indian Army’s instructions on list of ‘Do’s and Don’ts’ which must be followed while acting under AFSPA. It contained precautionary measures to ensure that least violence is caused and human rights of the people involved are safeguarded. Some of the measures like giving warning before open firing, and shooting low are enlisted in the dos and don’ts.

In November 2004, the Central government appointed a five-member committee headed by Justice BP Jeevan Reddy to review the provisions of AFSPA in the north-eastern states. The committee recommended that AFSPA should be repealed and specials provisions should be added in the Unlawful Activities Prevention Act, instead, which could clearly specify the powers of the armed and paramilitary forces. It also recommended that grievance cells should be set up in districts where the armed forces were deployed.

In 2009, Mohd Azad Khan, a 12-year-old boy was killed in Manipur by the armed forces. Justice Santosh Hegde committee enquired into it and found that the encounter was neither legitimate, nor done in self-defence.

Meghalaya Chief Minister Conrad Sangma, from National People’s Party, the opposition to BJP in the state and Nagaland CM Neiphiu who is in alliance with the BJP in the state have both tweeted and appealed to repeal AFSPA.

Raijor Dal President, opposition in Assam, Akhil Gogoi condemned the killings. He said that the National Investigation Agency should investigate this incident and declare it as a ‘terrorist act’. "(The) Nagaland killings are a caricature of the Indian Govt. Revoke AFSPA," Akhil Gogoi tweeted. In August 2021 itself, Assam was declared a disturbed area under AFSPA.

Apart from these, opposition leaders in the entire country are reacting to the killings of civilians in Nagaland and demand justice.

AFSPA should be repealed

Nagaland and the Naga people have always opposed #AFSPA. It should be repealed.

PRO Defence (Kohima) Lt Col Sumit K Sharma said “Based on credible intelligence of likely movement of insurgents, a specific operation was planned to be conducted in the area of Tiru, Mon District, Nagaland. The incident and its aftermath is deeply regretted.”

Home Minister Amit Shah said that the Special Investigation Team (SIT) probe into the incident will be completed within a month. He also asserted that all agencies must ensure such happenings do not recur while taking action against insurgents. [Read More]