How Soon Can A Covid-Patient Get Re-infected With Omicron? What Experts Said

Scientific evidence shows that once a person recovers from any variant of Sars_Cov_2, be it Alpha, Beta, or Delta, the possibility of reinfection is extremely low and that too after six to nine months. So far as Omicron is concerned, the rate of reinfection is not known in India yet. 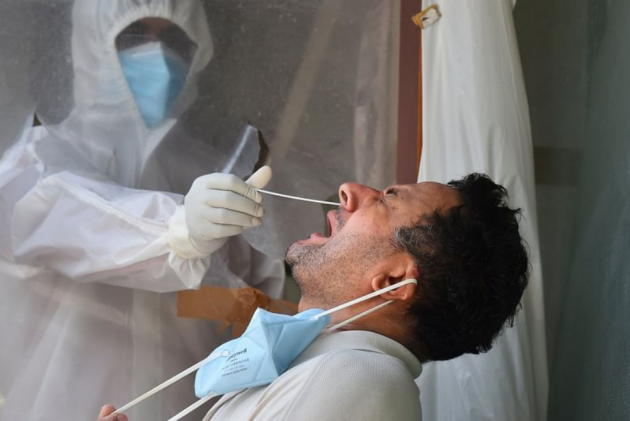 The high infectivity of the new variant Omicron has caused panic among people. In just 10 days, the country has witnessed more than 7 times increase in daily positive cases.

What has pressed the panic button is the fact that the Omicron has infected fully vaccinated and even booster-administered persons as well. However, its mild symptoms have been the silver lining so far.

The fear is so deep-rooted that those who have recovered from it are asking, “Will I get Omicron again?”

Scientific evidence shows that once a person recovers from any variant of Sars_Cov_2, be it Alpha, Beta, or Delta, the possibility of reinfection is extremely low. In the case of previous variants, it has been noticed that the rate of reinfection is less than 5 per cent.

For instance, people, who were infected with Wuhan strain, Alpha and Beta variants, very few of them got re-infected when another variant Delta hit the country.

The case in point is Asia’s biggest slum Dharavi in Mumbai which remained Covid-19 free at a time when Delta caused a second wave and ravaged all other parts of the country. This was because Dharavi dwellers were already infected in the first wave with the Wuhan strain and other variants.

So far as Omicron is concerned, the rate of reinfection is not known in India yet.

Another important aspect is that it takes six to nine months for a person to get re-infected. So the reason for low reinfection and longer protection is the human body’s immune system.

According to immunologists, when any virus or its variant infects a person, the immune system produces antibodies and kills the virus. This antibody wanes with the passage of time.

“It has been noticed that if a person gets infected with Sars_Cov_2 or any of its variants, the antibody so formed gets depleted in six to nine months,” Gyaneshwar Chaubey, a professor of genetics at Banaras Hindu University (BHU), said.

Does it mean that a person who has recovered from Covid-19 will get it again after six to nine months?

“No. The chance of reinfection is very rare. Even if the antibody disappears from the blood, there are memory cells in the body that memorises the virus. We have seen so far that the memory cells form antibodies against new variants also," Dr Samrat D Shah, internal medicine specialist and honorary internist to the Governor of Maharashtra, said.

He added, “So whenever a person who has recovered from Covid-19 comes in contact with the virus or its new variants anytime in future, the memory cell recognises it and immediately makes antibody to fight against the variant. This is called natural immunity. That’s the reason a Covid-19 recovered person doesn’t get reinfection easily.

Several studies have been done to find out how long the natural immunity will protect an individual from the virus and its variants. Many of them have suggested that natural immunity is long-lasting.

Since vaccines have either dead viruses or the lethal part of the virus, knowns as spike protein, they activate the immune system as a live virus does.

However, studies have established that a person who has recovered from Covid-19 doesn’t need vaccination because he develops natural immunity which is far more superior to the immunity that the vaccine will produce. That’s the reason a vaccinated person is more prone to reinfection than a naturally recovered person.

"Studies have also shown that people, who were infected with Sars_Cov_1 which had spread in 2001-02, developed antibodies against Sars_Cov_2 when they were exposed to this virus. This shows that natural immunity provides long-lasting protection," noted epidemiologist Jayaprakash Muliyil said.

Despite that vaccination is important to those people who haven’t contracted the virus because no one knows how severe the infection will develop in an individual.

Many health experts criticise the current vaccination drive which covers everyone above the age of 16 as they argue that when the scientific evidence clearly suggests that naturally recovered persons are very well-protected, why the government is not excluding the confirmed Covid-19 recovered people.