BJP has slammed Mamata Banerjee for choosing August 16 as 'Khela Hobe' Divas as it coincides with the Great Calcutta Killings in 1946. But the date is also significant for another reason. 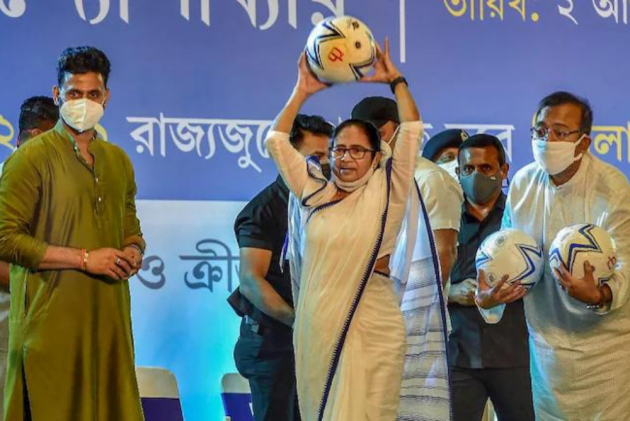 On July 21, BJP Rajya Sabha MP Swapan Dasgupta tweeted, “Interesting @MamataOfficial has declared August 16 as “Khela Hobe Divas”. It is the day the Muslim League launched its Direct Action Day & began the Great Calcutta Killings in 1946. In today’s West Bengal, “Khela Hobe” has come to symbolise a wave of terror attacks on opponents.”

The BJP’s Darjeeling MP and national spokesperson Raju Singh Bista also made a similar comment on the same day. “On 16th Aug, 1946, Mohammad Ali Jinnah announced Direct Action Day that led to the massacre of Hindus in the streets of Kolkata. TMC‘s call for the so-called "Khela Hobe Diwas" on the same day originates from the same philosophy - bloodshed," Bista tweeted.

Three weeks later, on August 10, governor Jagdeep Dhankhar shared a 31-second video clip from his Twitter handle, showing a group of saffron-clad sadhus meeting him at Raj Bhavan. Dhankhar wrote in the accompanying text, “Representatives of Sanatan organisations called on Governor WB today to seek change in the date of "Khela Hobe Divas" as it reminds the horrendous memories of Direct Action Day and ‘the week of long knives’ in 1946 that led to killings of thousands.”

Dhankhar, who has been widely accused of being biased towards the BJP, added in the following tweet, “Their only objection was to the date of “Khela Hobe Divas" and sought intervention to convey their feelings to the government. Governor assured them that their (sic) feelings would be conveyed to the government.”

It is for readers and political observers to find if there is any link between the two tweets but one understanding required no amount of imagination: the saffron camp wants to revive the bloody memories of the 'great Calcutta killings' -  one of the worst episodes of communal riots in Bengal in the stormy days preceding the Partition - to counter the chief minister’s celebration of a day with a slogan that has now found popularity beyond the borders of the state.

Mamata Banerjee had announced on July 6 that due to the popularity of the slogan Khela Hobe, the state government will observe a Khela Hobe Dibas every year to encourage sports. Later, she announced August 16 as the day and said that the government will distribute footballs among local sports clubs on that occasion.

The day has been named thus to immortalise the Trinamool Congress (TMC)’s political slogan – meaning ‘game on!’ – which is believed to have played a key role in lifting the morale of TMC workers ahead of the high-voltage electoral contest with the BJP earlier this year.

As for the choice of the date, August 16 is memorable not only for what happened in 1946 but also because of what happened in 1980. On the latter occasion, the Eden Gardens witnessed a riotous situation between the supporters of East Bengal Football Club and Mohun Bagan Athletic Club, Bengal’s two biggest sports clubs known for their legendary football rivalry, during a derby between the two. The chaos resulted in a stampede that claimed the lives of 16 football lovers. It also resulted in the suspension of the Calcutta football league.

Since then, August 16 is observed as Football Lovers’ Day in memory of what has been known as one of the most tragic incidents on a sports field in India. Football lovers often organise blood donation camps on that day. The West Bengal chapter of the Indian Football Association (IFA) also observes this day with blood donation camps.

This August 16, the Indian national football team is scheduled to play a warm-up match against Bengal’s Santosh Trophy team at the Salt Lake Stadium.

On August 2, the chief minister distributed many footballs made by members of women-led self-help groups.

In contrast, the delegation to the governor was led by the BJP’s new poster boy in Bengal, Suvendu Adhikari, at present the leader of the opposition in the state assembly. In a tweet a couple hours before receiving the delegation, Dhankhar had announced that “leaders and representatives of several organisations” along with Suvendu Adhikari, whom the governor introduced as “chairman of trustees of Jagannath Temple, Mechada”, would be visiting him “to express their viewpoint on current issues of import.”

The delegation included, apart from Adhikari, Pradiptananda, a firebrand Hindu monk belonging to the Beldanga unit of Bharat Sevashram Sangh. Pradiptananda has been closely associated with Sangh Parivar organisations such as the Vishwa Hindu Parishad, Hindu Jagran Manch and a breakaway faction named Hindu Samhati whose present leader recently contested the Bengal elections on a BJP ticket.

Not only the saffron camp members and supporters in Bengal but also those beyond the state border are trying to link Mamata Banerjee’s event with what happened in 1946. Prasanna Viswanathan, the CEO of the right-wing publication, Swarajya Mag, wrote on Twitter while sharing an article from the publication, “'Khela Hobe Till BJP Is Wiped Out': Mamata Banerjee Announces 'Khela Hobe Diwas' on 16 Aug — 75th Anniversary of Direct Action Day. Muhammad Ali Jinnah in 1946 announced 16 August as the "Direct Action Day" to carve out a separate Muslim homeland.”

Sarthak, a Twitter user who describes himself as a ‘mad-mad Hindu’, wrote, “Is it a Coincidence or #MamataBanerjee is Directly Giving Warning that Khela Hobe Diwas is the Upgraded Version of Direct Action Day???”

According to a veteran sports journalist who did not want to be identified, this was the first time August 16 became politicised. “For the past 40 years, August 16 is being commemorated as football lovers’ day without any kind of political interference. First, Mamata Banerjee tried to appropriate the occasion and then the BJP tried to give it a communal twist. This is unfortunate,” the journalist said.

He added that he did not consider the day as an apt one for Khela Hobey Dibas either. “Khela Hobey is more of a political war cry of the Trinamool Congress and it does not seem to be appropriate on day commemorated as a solemn occasion. Nevertheless, the BJP’s plot to communalise the event can’t be supported either.

According to Pratik Bandyopadhyay, a former sports journalist with the Times of India, the trauma that  August 16 is to Bengali sports enthusiasts can never be overrated.

"The 16 lives lost at Eden Gardens on 16th August 1980 were not the only casualties. There was a person in my own locality, who almost died in the stampede. He could not regain full normalcy even twenty years later, had fits from time to time and sometimes shivered while sitting in a corner. There are hundreds of families in West Bengal who feel the repercussions of that inauspicious day even today," Bandyopadhyay said.
He added that, in contrast, the 1946 riots were 'a distant memory'. "Its biggest impact has, of course, been the partition of the country. Those who lived through that trauma have mostly passed away but that day is alive in collective memory, bearing both facts and fiction. To use either of these tragedies as a cheap political trick shall hurt a lot of people whose biggest treasure is the memory of loved ones who lost their lives on those ill-fated days," said Bandyopadhyay.