Not all states have yet declared SOPs for the upcoming Ganesh Chaturthi celebrations on September 10. However, these six states including Maharashtra and Karnataka have outlined guidelines for the celebrations. 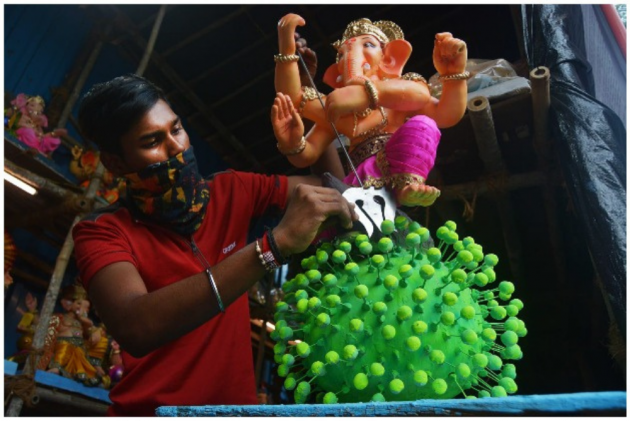 Ganesh Chaturthi is set to be celebrated across the country on September 10. And states have already begun preparing for the festivities that often last nearly a week. However, much like last year, festivities are set to be subdued this year as well due to Covid-19 restrictions.

Different states have come up with different rules for Ganesh Chaturthi celebrations this year.

Ahead Of Ganesh Chaturthi, Mumbai Police Cracks Down On Covid Violators For Not Wearing Mask

The state of Maharashtra, which sees grand Ganesh Chaturthi celebrations every year, has been asked to take it easy this year in view of the Covid-19 pandemic.

No procession will be taken out in Mumbai during Ganesh festival after the police on Thursday barred people from assembling together due to the ongoing COVID-19 pandemic.

The prohibitory order has been issued under CrPC section 144 in Mumbai, which bars assembly of five or more persons.

For now the order would continue during the Ganesh festival scheduled between September 10 to 19.

No processions of any kind would be allowed in the city during this period and devotees would not be allowed to visit Ganesh pandals either, an official statement added.

Section 144 of the Code of Criminal Procedure empowers the authorities to issue prohibitory orders for preventive purposes. 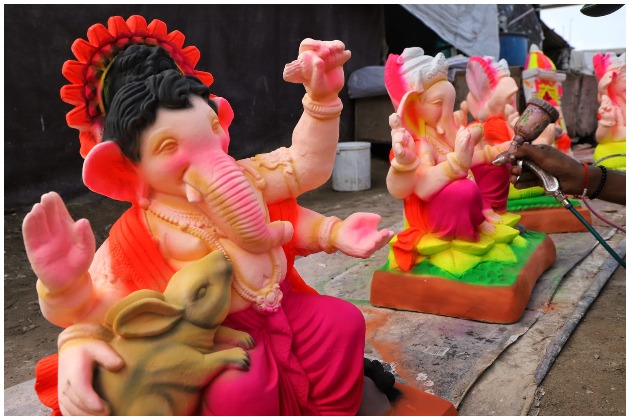 (An artist from Rajasthan gives final touches to lord Ganesha Idol ahead of Ganesh Chaturthi in New Delhi. Photo By Suresh K Pandey/Outlook)

With the state's COVID test positivity rate falling below two per cent, the government in Karnataka has decided to allow a five-day celebration of Ganesh Chaturthi ahead of the Hindu festival. The celebrations are set to begin on September 10.

However, the state has allowed celebrations to take place only in districts with less than 2 per cent Covid positivity test rate. It has also prohibited cultural events or processions while bringing the idols into pandals (venues) or during visarjan (idol immersion).

The Tamil Nadu government had earlier last week put a ban on the celebration of the Ganesh festival by prohibiting idols from being erected. It has also doubled down on implementing the closure of religious places of worship during the weekend and allowed 'pujas' only inside households and not in public pandals or temples.

However, in the face of stiff opposition, especially from the Bharatiya Janata Party, the state on Monday relented and allows celebrations to take place, though in a subdued manner and in adherence to Covid-19 protocols. The change in decision came after Hindu outfit HMK moved court seeking SOPs for Ganesh Chaturthi celebrations. The DMK government on Monday told court that small temples may open on the occasion and the devotees were allowed to place Ganesha idols outside temples. However, the state will take the responsibility for immersing the idols. 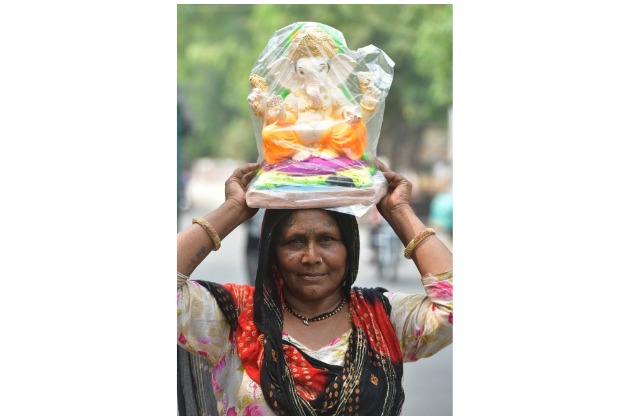 (A woman carries the Ganesh idol on her head ahead of Ganesh Chaturthi. Photo by TT)

Despite protests by the state BJP units, Andhra Pradesh has so far maintained a ban on public celebration of Ganesh Chaturthi in view of the Covid-19 pandemic. Reacting to the ban, BJP cadres staged protests across the state on Monday.

The state has offered relaxation in night curfew for the occasion of Ganesh Chaturthi. These relaxations have been allowed in
The Gujarat government on Tuesday issued guidelines for Janmashtami and Ganesh Utsav celebrations, announcing certain relaxations from coronavirus-induced restrictions during the coming festivals.

The state government announced relaxation in night curfew time in eight metros for Janmashtami and Ganesh festival eight cities including Ahmedabad, Surat, Gandhinagar, Bhavnagar, Junagad, Jamnagar, Rajkot and Vadodara. The relaxation in curfew timings will extend from September 9 to September 19 when the movement will be allowed till 12 am instead of the usual 11 pm curfew. Idol height in public pandals has been capped at four ft while residential idols have been capped at two feet.

The state has also issued guideline to maintain social distancing between devotees when visiting the pandals or temples, allowing only "aarti" and prasad distribution to take place in these venues. All other cultural events have been prohibited. The state has also placed restrictions of the number of people allowed to ride the vehicle with the idol for immersion, capping the maximum at 15.

Goa has allowed public Ganesh Chaturthi celebrations but banned the use of firecrackers or public processions to mark the celebrations. Only one vehicle with two persons has been allowed to go to the "Chitrashallas" to pick up idols.

The Goa government on Tuesday withdrew its standard operating procedure (SOP) for Ganesh Utsav celebrations in the state, which included a ban on priests visiting homes for rituals, as well as households having COVID-19 patients being barred from inviting guests or visiting others, within hours of it being issued.

The shadow of the third wave 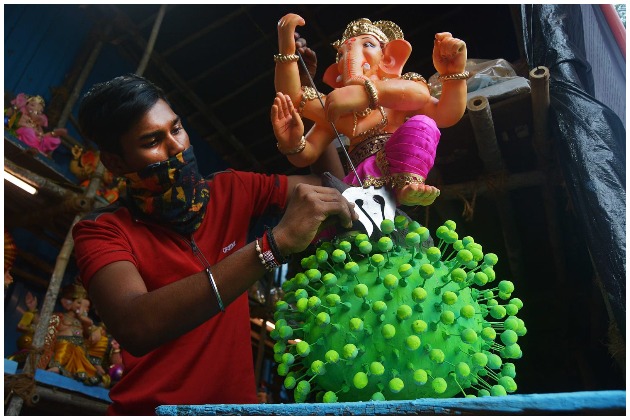 "Corona Mardan" - An artisan Dilip Angne gives finishing touches to an idol of Lord Ganesh ahead of the 'Ganesh Chaturthi' festival, at  Goregaon in Mumbai. Photo by: Dinesh Parab/Outlook

Even as several states prepare for the upcoming Ganesh Chaturthi celebrations, the shadow of the third wave of Covid-19 looms large and several experts have warned about a surge in cases following the celebrations. In Goa, for instance, Shekhar Salkar, an official from the state government's expert committee for Covid management has said that the second wave is still on in the state while the third wave is expected to strike after Ganesh Chaturthi.

This year too, states like Maharashtra continue to have a high number of active Covid-19 cases, with authorities listing seven districts as "districts of concern". Potential overcrowding and non-adherence to Covid-19 protocols may lead to further spike in cases.