The summit, with the theme of 'Shared Dreams, Bright Futures' will highlight the contributions of Indian-Americans in enriching the American life for the last seven decades 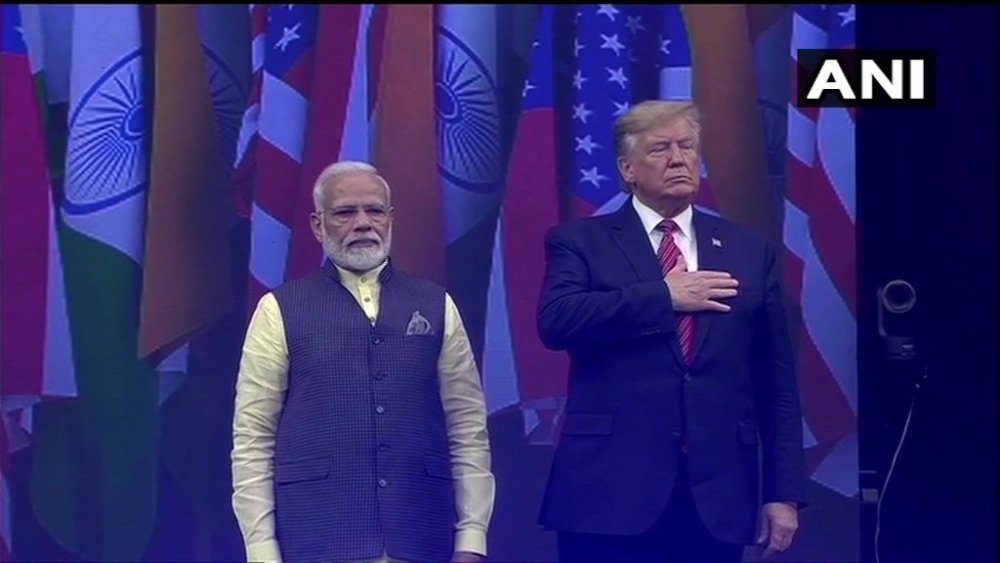 US President Donald Trump on Sunday arrived at the crowded NRG stadium in Houston where he will address the Indian-American community along with Prime Minister Narendra Modi.

Trump joined Modi at the mega event as a "special gesture" by him to underscore the special bond between the two countries. It is for the first time that Trump and Modi shared a stage together. They will address a record crowd of 50,000 Indian-Americans.

Modi welcomed Trump and the two leaders embraced each other and walked together towards the stage.

Earlier, the "Howdy,Modi!" event kicked off in Houston with a lot of fanfare and celebration. A cultural programme preceding Prime Minister Modi's address began showcasing Indian-American artists from Texas and elsewhere.

The performances ranged from Indian Classical dances from across the Indian Subcontinent to mainstream Bollywood dance. Besides, Western dance forms also took the centre-stage which portrayed how the community is woven into the larger tapestry of American life.

The 90-minute music, dance, and multimedia show features close to 400 artists and community members from Texas and across the nation. There are 27 groups performing in a live and multimedia experience that will showcase the diversity in the Indian-American community, organisers said.

Hours before the event, the people eagerly poured in at the NRG stadium to witness the magnanimous summit between two world leaders.

''We are excited to see Prime Minister Narendra Modi, we expect to hear from him, and get words of wisdom from him because he is an inspiration for the country and people around the globe,'' Mitt, a Dallas resident said.

"We came here for the event and are very excited to hear from both, two great leaders from the two greatest democracies in the world are coming together on the same platform," another visitor was quoted by ANI as saying.

Reportedly,  even people from Canada have come to witness the event.

"We came from Canada just to witness the 'Howdy, Modi!' program, my whole family is here just for it," he said.

The mega event will witness leaders of the two largest democracies, Prime Minister Narendra Modi and Trump, sharing a stage before the largest gathering ever -- over 50,000 Indian-Americans -- for an elected foreign leader visiting the US.

Looking forward to the address 'Howdy, Modi' rally in Houston, US President Donald Trump said on Sunday that he and PM Modi will have a good time at the mega event.

"He (Modi) asked if I would go with him and I've accepted and We're going to have a good time," Trump said minutes before he boarded Marine One from the White House lawns. "I hear it's a tremendous crowd," he added.

"We'll be going to Houston and we'll be at a very nice big stadium packed full of people with Prime Minister Modi," Trump said.

The roughly three-hour-long event is being organised by the non-profit Texas India Forum, with the tagline 'Shared Dreams, Bright Futures'. It will shine a light on the tremendous contribution of Indo-Americans in the United States and the strong and lasting partnership between the US and India.

The sprawling NRG Football Stadium which is one of the largest in the US which has served as a venue for some of the most impressive events starring Beyonce, Metallica, to name a few.

"This is a historic event and we do not have any words to express how we feel like a volunteer to be a part of this event," said a volunteer at the event.

"I am very excited about the event, this event is one of a kind in the world that PM Modi will be attending," said Mahesh Shah, a participant at the event.