“Bundle of notes… uncountable bundles of notes, still being counted for the third day… people counting them have got exhausted,” the chief minister said, referring to the taxation sleuths raids at Jain’s house in Kanpur. 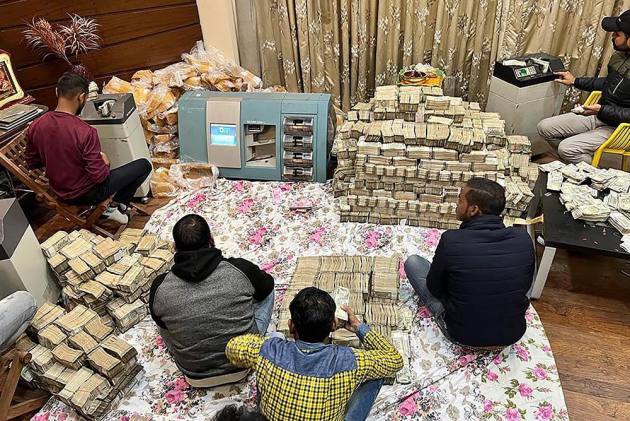 On Monday, Uttar Pradesh Chief Minister Yogi Adityanath said the recovery of a huge amount of cash in a raid by taxation agencies has made it clear why the SP and BSP leaders were scared of the 2016 demonetisation by Prime Minister Narendra Modi.

Adityanath made the allegation while addressing a rally at Sitapur and referring to the recovery of a huge amount of cash from the house of Kanpur businessman Piyush Jain, whom the BJP accuses of being close to Samajwadi Party, which, in turn, has been stoutly refuting the charge. “I had heard, seen and thought that the goddess Laxmi visits us on Deepawali. But these sinners had imprisoned (the goddess) in walls… Didn't you see in the houses of Samajwadi Party leaders, goddess Laxmi has started emerging even from their walls?” Adityanath told the rally.

“Bundle of notes…  uncountable bundles of notes, still being counted for the third day… people counting them have got exhausted,” the chief minister said, referring to the taxation sleuths raids at Jain’s house in Kanpur. “Brothers and sisters, now you would have understood why the Bua and Babua had been opposing demonetisation,” the chief minister said, apparently referring to BSP supremo Mayawati as Bua and SP chief Akhilesh Yadav as Babua.

The chief minister made the remarks in his Sitapur rally, shortly before the Union Finance Ministry gave details of the recent searches on perfume trader Peeyush Jain's house in Kanpur from where GST officers had seized more than Rs 177 crore unaccounted cash from his house. The searches since December 22, which resulted in Jain's arrest, also included searches at the trader's residential/factory premises in Kannauj, wherein about Rs 17 crore in cash, 23 kg of gold and 600 kg sandalwood oil with a market value of about Rs 6 crore have been recovered, the ministry said in a release. Further searches are underway at Jain's residential and factory premises in Kannauj.

In Sitapur, Adityanath also inaugurated the completed projects and laid foundation stones of new ones, totalling worth Rs 116 crore besides addressing the rally as part of the BJP’s poll campaign Jan Vishvas Yatra. A day after holding a programme for distributing laptops and mobile phones to UP students, the chief minister also targeted Yadav for often saying that Adityanath was not distributing these gadgets to students because he himself does not know how to operate even a mobile phone.

"The new worry for the Babua is why tablets and smartphones are being given to youths. How can the Samajwadi tolerate this? For them, the family was the state, but for us, the state is the family," the chief minister said. The chief minister also told the rally that before long his government will start giving appointment letters to over five lakh youths recruited in various government departments in UP. “I have told officials that I may not be having time to give these letters personally, so start sending them to the youths yourself,” he said, apparently referring to his heavy engagements ahead of the upcoming UP assembly elections.