Out on bail, Azad says he will continue his fight against the citizenship law till it is rolled back. 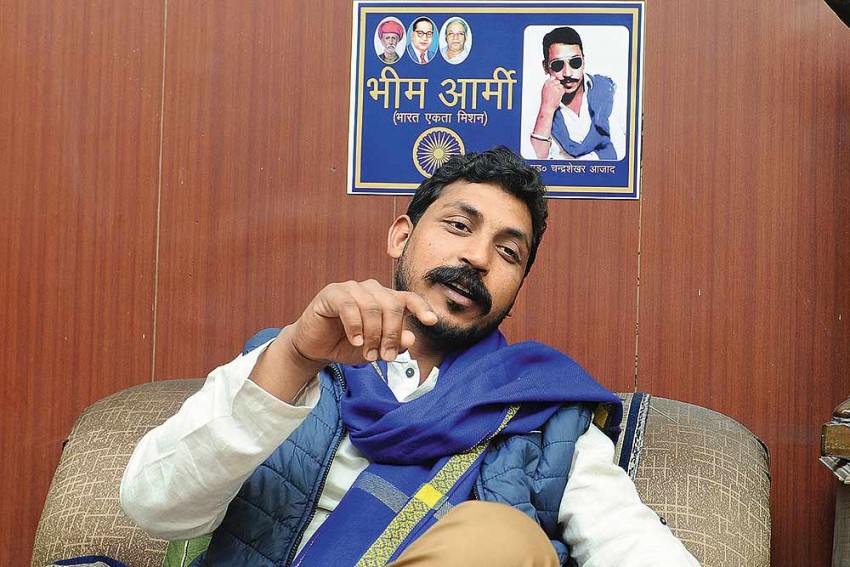 A day after his release from Tihar jail, Bhim Army chief Chandrashekhar Azad says he is hopeful that the Delhi court which granted him bail, will lift the restrictions imposed on him.

Azad was arrested on charges of inciting violence during anti-citizenship law protests in the capital. The court granted him bail under the conditions that he would not hold any protests in Delhi until the Assembly elections were over.

In an exclusive interview with Outlook, the Bhim Army chief  tells Preetha Nair that he will continue his fight until the Centre withdraws the controversial Citizenship Amendment Act. Excerpts:

The court has directed you to stay out of Delhi for a month and you had to leave the city in 24 hours after your release. Are you disappointed with the restrictions on your visit to the national capital and Shaheen Bagh?

People from all over the country are participating in the protests here. Why am I being stopped from entering Delhi for a month? What have I done? Is it because I am a Dalit? I have appealed to the court to lift the restrictions and looking forward to a positive decision on this. Ours was the first party to lend support to the Shaheen Bagh protests. It came alive after that. The people in Shaheen Bagh love me and their blessings are always with me. I want to be a part of their fight and share their sufferings. It’s my responsibility to strengthen their fight.

You are allowed in the capital only after the Delhi elections are over. Are you in a direct fight with the BJP government?

The BJP understands that I am a threat to them. They put me in jail for a year in 2017. My presence makes it difficult for them to win in elections. Let them do what they can. Dalits also have rights in this country. We draw our strength from the Constitution and my fight is to protect our constitutional rights.

It’s shameful when they say that the Shaheen Bagh women protesters are paid Rs 500 daily. This happens only in BJP rallies. We are here to protest because our existence is under threat. By keeping Muslims out of CAA, the government is discounting their sacrifices to the country. This law challenges our rights as citizens and we are fighting against the government’s divisive tactics. And the Shaheen Bag protestors are not sitting in chairs...

You were arrested for inciting violence through your speech...

After your release, you said that you will read the Constitution daily...

What is the significance of this Republic Day in view of the nationwide protests against the CAA and the proposed NRC?

It’s heartening to see that a large section of our society, led by women and students, is protesting to protect our constitutional rights. It’s the educated who are protesting now. Who has given police the right to beat up students of Jamia Millia Islamia and AMU? They were mute spectators when a mob attacked JNU students. It’s an important time because young people are hitting the street against a discriminatory law and the attacks against students.

No. Hum kagaz nahi dikhayenge (we will not show our documents), come what may. We will continue our movement until the government withdraws the CAA.

Your party had plans to contest Delhi elections… What now?

We are waiting for the court's decision before taking further action. Our priority is our nation and strengthening the movement against CAA, NRC and NPR. Politics can wait.

There were reports of alleged police brutality in Uttar Pradesh against the anti-CAA protestors. Will you launch an agitation against the citizenship law in UP?

I am waiting for the court's decision. There are restrictions on holding rallies and demonstrations. I have to consult our lawyers about this. After that, whoever has extended support to the movement, we will stand with them.

Opposition parties are still not able to put up a united face on CAA, NRC and NPR. Mayawati and Samajwadi Party (SP) stayed away from a recent opposition meeting. Will you join hands with any party?

Your health has been a concern in jail. The court had to interfere for your treatment...

I am still not keeping well and need rest. My immediate priority would be health and meeting my family in Saharanpur; I haven’t met them for a long time.

UP elections are slated to be held in 2022. Do you have any long-term strategy?

We are not thinking about elections now.