The dharna by the municipal leaders outside Delhi CM residence, seeking release of funds entered its twelfth day as they refused to budge. 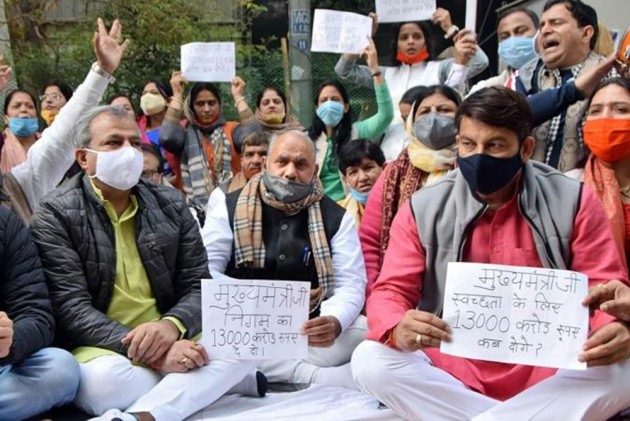 Former South Delhi mayor Sunita and two other councillors were on Friday hospitalised, a day after they joined the mayors of the three BJP-led municipal corporations in their indefinite hunger strike to demand release of funds "due to the civic bodies" from the city government.

The dharna by the municipal leaders outside Delhi CM residence, seeking release of funds entered its twelfth day as they refused to budge.

Mayors and a few senior leaders of the three municipal corporations on Thursday had gone on an indefinite hunger strike at the protest site to demand release of funds, they claim is "due to the civic bodies".

The health of three councillors has deteriorated due to hunger strike, and they had to be admitted to Hindu Rao Hospital, Prakash said.

They are former South Delhi Mayor Sunita, Chairperson of Health Committee in East Delhi Municipal Corporation, Kanchan Maheshwari and Deputy Chairman of South Zone Ward Committee in SDMC, Maya Bisht. These three had to be admitted to the hospital due to low blood sugar, the North Delhi mayor said.

South Delhi Mayor Anamika said, "Our women councilors have also been sitting in extreme cold weather with their male counterparts, braving winter chill, even without basic amenities, but unfortunately the chief minister has turned a blind eyes towards the issue".

"Many councilors are on hunger strike, and their health is deteriorating, hence instead of showing callousness, the Delhi CM should ask the government officials to ensure release of corporations' share without any delay," she said.

The three mayors have claimed that Rs 13,000 crore in total is due to the North, South and East corporations, from the Delhi government.

Last week, the three mayors had held a joint press conference at the sit-in site and said, the protest "will continue democratically, so that we can pay salaries to corporation employees on time".

From Monday morning, the three mayors had started "running their offices" from the streetsides.

The AAP has hit back, saying, "Even the mayors of BJP-ruled MCD know that their protest is only an excuse by their high-command to harass CM Arvind Kejriwal and distract from the issue of nationwide farmers protests".