Husband, Daughter Bid Farewell To Sushma Swaraj With A Salute

The father-daughter duo saluted Sushma Swaraj amidst a swarm of leaders cutting across party ranks and files. 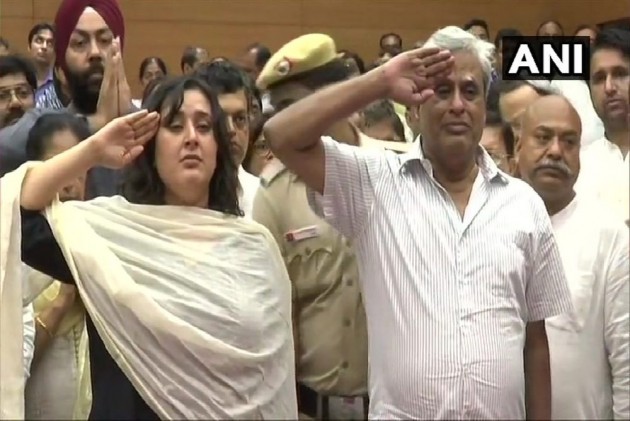 As the nation bid a tearful adieu to BJP stalwart and former External Affairs Minister Sushma Swaraj, her husband Swaraj Kaushal and daughter Bansuri Swaraj paid their obeisance by saluting her as full state honours were accorded to the veteran leader.

The father-daughter duo saluted her amidst a swarm of leaders cutting across party ranks and files. People from all walks of life thronged the BJP headquarters in the national capital to get a last glimpse of the former Foreign Minister.

The mortal remains of Swaraj, who passed away of a cardiac arrest on Tuesday night, was taken to the BJP headquarters in Rouse Avenue from her house in an ambulance.

The body was kept there for people to pay homage and later taken to Lodhi crematorium for last rites.

Swaraj, who passed away at AIIMS, was BJP's most prominent woman face.

Doctors at AIIMS said that the 67-year-old was feeling restless at 9 pm on Tuesday and was brought to the hospital at around 9:30 pm. She was declared dead at 10:50 pm.

Swaraj was the foreign minister in the first term of the Modi government in 2014. She opted out of the 2019 Lok Sabha elections citing ill health.