I Am Working As Per Constitution, Says Karnataka Assembly Speaker

The apex court will pronounce its order Wednesday morning on the pleas of 15 rebel Congress-JD(S) MLAs seeking direction for Kumar to accept their resignations from the Assembly. 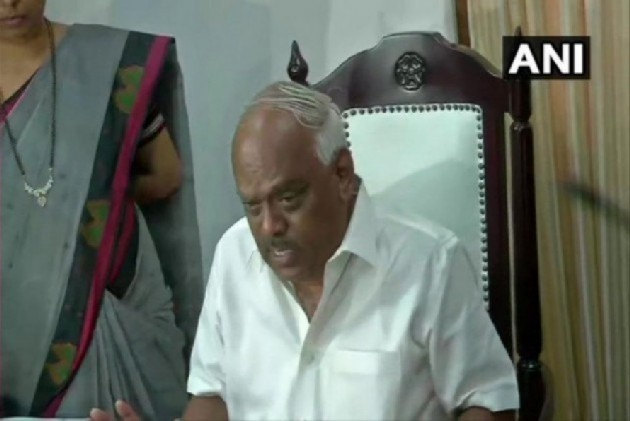 Karnataka Assembly Speaker Ramesh Kumar, against whom 15 ruling coalition rebel MLAs have moved the Supreme Court alleging delay in accepting their resignations, Tuesday said he is working in accordance with the Constitution and was performing his duty.

The apex court will pronounce its order Wednesday morning on the pleas of 15 rebel Congress-JD(S) MLAs seeking direction for Kumar to accept their resignations from the Assembly.

"Ultimately, whatever the Supreme Court comes out with (its verdict), after going through that, I will respond," Kumar told reporters in Kolar district.

Stating that he was working in accordance with the Constitution, he said: "I don't have the freedom to comment on all other matters being the Speaker."

"I am not someone who is going to challenge... I will only perform my duty... everyone will have to wait till tomorrow," he added.

The order from the Supreme Court will come a day before the tottering Congress-JD(S) government faces the floor test in the assembly, which would end suspense over the numbers game triggered by a raft of resignations by the ruling coalition lawmakers.

As many as 16 MLAs -- 13 from the Congress and three from the JD(S) -- have resigned while two independent MLAs S Shankar and H Nagesh have withdrawn their support to the coalition government, keeping it on the edge.

In a bid to keep their flock together ahead of the floor test, the Congress, BJP and JD(S) have shifted their MLAs to resorts.

The Congress Tuesday shifted its MLAs from a hotel in the city to a resort on the outskirts, amid fears that some more legislators may resign.

Reacting to state BJP chief Yeddyurappa's reported statement claiming that other 2-3 MLAs were likely to resign ahead of the confidence motion, KPCC chief Dinesh Gundu Rao alleged that resignations of Congress-JD(S) MLAs were with "malafide intent."

The ruling coalition's strength in the House is 117, besides the Speaker.

If the resignations of the 16 MLAs are accepted, the ruling coalition's tally will be reduced to 101.

According to official sources, the nominated member too has a right to vote.