I Appeal To Modiji, Rescue My Husband Safely Like Abhinandan: Wife Of Abducted CRPF Jawan

The family of the CRPF jawan abducted by Naxals blocked the Jammu-Poonch highway and demanded his safe release. 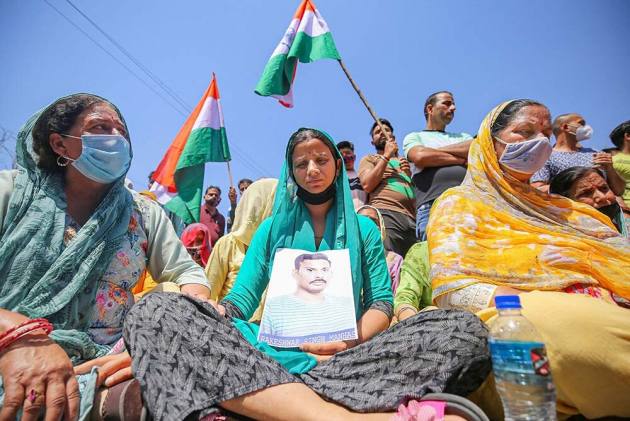 The family of the CRPF jawan, abducted by Naxals after a gun battle with security forces, on Wednesday blocked Jammu Aknoor road and appealed to Prime Minister Narendra Modi and Union Home Minister Amit Shah for his safe release.

The relatives of the CoBRA commando raised slogans demanding his release and were seen carrying the tricolor.

Meenu, the wife of the abducted commando Rakeshwar Singh Manhas, said, “I appeal to Modiji to rescue my husband safely, just the way Abhinandan was brought back from Pakistan. I last spoke to him on Friday. He told me he was going on an operation and would speak to me later.”

Twenty-two security personnel were killed and at least 30 were wounded in the four-hour gun battle with Maoists that took place in the forests of Bijapur in Chhattisgarh on April 2.

This was the gravest attack in four years. During the encounter, the Maoists abducted Manhas who hails from Jammu.

“He is not in China or in Pakistan; he is in our own country, why can’t he be rescued?” questioned another relative of the CRPF jawan during the protest.

“Besides our relative, he belongs to the CRPF force and he has been abducted and the government is not doing anything. It has been five days and nothing has been done so far. Now the concerned CO of his battalion doesn’t even pick our phone,” says one of the protesters identifying himself a close relative of the CRPF jawan.

“For five days they haven’t said anything. Those who have abducted him are saying he is in their custody and want the government to talk with them but the government is not doing anything,” he said.

The family is seeking the intervention of the government.

“I want my brother back. Please get my brother,” said the wailing sister of the soldier.

After waiting for Manhas’ return for five days, his family blocked the Jammu-Poonch highway to draw the government’s attention towards the issue of his release.

“Had he been a son of some Minister, by now they would have forgotten all elections and devoted whole time to rescue him. But he is not. Even Lt. Governor of Jammu and Kashmir has not tweeted about it. Such is the government’s attitude. We want the Central government to take steps to rescue him.”