'I Can See A Big Split': Rajasthan CM Ashok Gehlot After BJP Shifts MLAs To Gujarat

BJP has sent its 18 MLAs in the past two days to party-ruled Gujarat ahead of the Rajasthan assembly session beginning August 14. 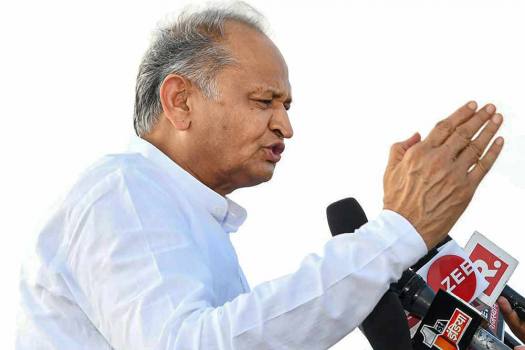 Rajasthan Chief Minister Ashok Gehlot on Sunday questioned the shifting of BJP MLAs to Gujarat, saying the opposition party was ridden with factionalism.

His comments came in the wake of the BJP herding its 18 MLAs in the past two days to party-ruled Gujarat ahead of the Rajasthan assembly session beginning August 14.

The BJP had claimed that their MLAs were being harassed by police and the administration at the behest of the Congress government in the state.

Gehlot, on the other hand, defended the stay of Congress legislators at a Jaisalmer hotel, saying the party required to keep them together to thwart horse-trading.

“But, what is worrying the BJP? They are herding their legislators to three-four places. I see a big split in them," Gehlot told reporters in Jaisalmer.

Lashing out at the opposition party, Gehlot said the “tradition they are setting up is dangerous to democracy”.

He said while BJP is trying to topple his government, the government is making efforts to save lives amid the coronavirus crisis.

Unfortunately, such people sitting in power are weakening democracy, which we saved for the past 70 years, Gehlot said.

He added that their fight to save democracy will continue even after August 14 and the truth will prevail.

"I can say this that the victory will be ours, truth will win,” he said, stressing that his “government will complete its five-year term”.

Gehlot on Sunday also wrote to all Rajasthan MLAs, urging them to listen to the voice of people to save democracy and stand with the truth in the interest of people of the state.

The assembly session in the state, which has been witnessing a political turmoil after the rebellion by Congress Sachin Pilot and 18 legislators loyal to him, will start on August 14. Gehlot is likely to seek a trust vote during the session.

Replying to question on the Special Operations Group (SOG) notices given to MLAs in connection with alleged horse-trading, Gehlot said the investigation agencies wanted to talk to them but it was projected as a sedition case was registered against them.

He also rejected allegations that phone numbers of MLAs were being tapped. “The information was spread to mislead people. Neither the government can tap phone numbers nor it should do,” he said.