'I Feel Her Loss Greatly': Sonia Gandhi In Letter To Sushma Swaraj's Family

Sushma Swaraj had contested against Sonia Gandhi in 1999 from the Ballari Lok Sabha constituency in Karnataka, but lost by over 50,000 votes. 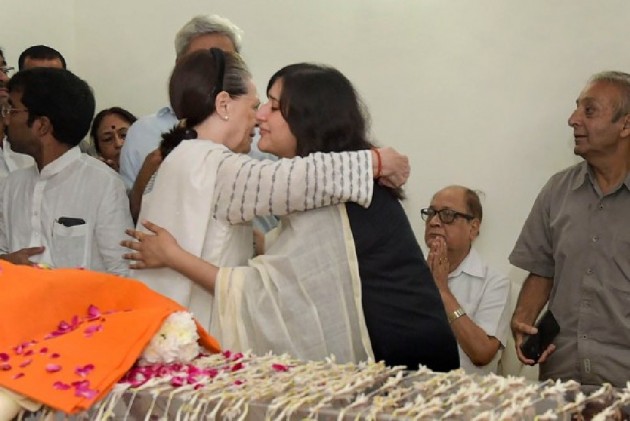 In her condolence letter to Swaraj's husband, Swaraj Kaushal, Gandhi said she shared a warm personal relationship with the senior BJP leader after being together as colleagues in the Lok Sabha for many years.

"I am shocked and deeply saddened at the sudden passing away of your beloved wife Smt Sushma Swaraj," the Congress parliamentary party leader said. "Sushma Swaraj was a lady of extraordinary gifts, her courage, determination, dedication and ability manifest in every position she held."

"Above all, it was her warm personal qualities that brought a special lustre to her years in public and political life," the United Progressive Alliance chairperson added.

Swaraj had contested against Gandhi in 1999 from the Ballari Lok Sabha constituency in Karnataka, but lost by over 50,000 votes in the electoral fight that attracted nationwide attention.

"Sushma ji was a superb orator, a great parliamentarian and had a rare gift for friendship that won her affection and admiration across the political spectrum," Gandhi said. "In our many years together as colleagues in the Lok Sabha, we developed a warm personal relationship and I feel her loss greatly."

The Congress leader said Swaraj made herself accessible to even the humblest person and established a warm rapport with people from all walks of life.

With her empathy and compassion, she gave Indian diplomacy a human face as she reached out to help every Indian citizen in distress, Gandhi said. "The same courage and grit that was a hallmark of Sushma-ji's political life, she showed in her personal life as well, as she faced her serious ailments with incredible fortitude," she said.

Swaraj passed away on Tuesday night in Delhi after suffering a massive cardiac arrest. She was 67.

The Congress leader said Swaraj left "far too young" as she had so much more to contribute to national life. "That makes her death even more tragic," she said.

Expressing grief to her husband and daughter Bansuri, the UPA chairperson termed it a "cruel loss" for them.

"You must draw solace from the fact that Sushma-ji lived a life of honour, filled with achievement and contributions to the country she loved; respected and admired by all Indians," Gandhi said.

"And she went as she had lived - active and engaged till the very end."