'I Would Be Petrified If...,' Says Nobel Laureate Abhijit Banerjee On Citizenship Law

Esther Duflo pointed out that it was wrong to assume that giving handouts to the poor made them lazy. 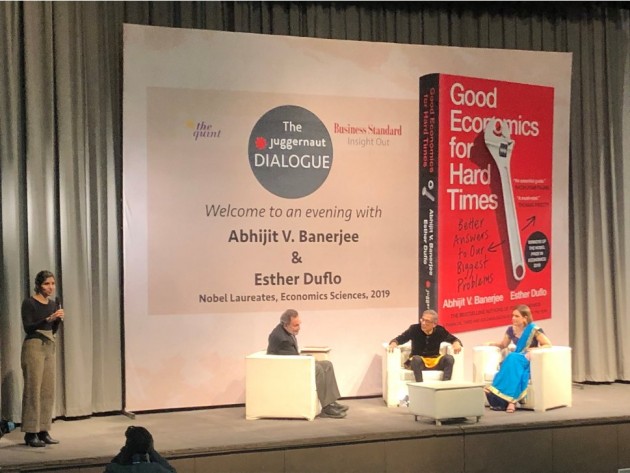 Nobel laureate Abhijit Banerjee on Friday expressed concerns over the newly amended Citizenship law of India, saying, "It can be a frightening governance problem."

Speaking at the launch of their book "Good Economics for Hard Times", authored by Banerjee and Esther Duflo, he said: "I would be petrified if I was living in a border area. What is disturbing is the enormous power some people will have in their hands. Such decisions should not be made with a swift bill."

Dressed in ethnic Indian wear and precipitating an almost rock-fan reaction from those in attendance, Banerjee and Esther stressed the need to ascertain that every system in the world ensures dignity for every individual as a core belief.

"We just can't treat the economically backward as failures, that would be a very Victorian approach," said Banerjee during the launch of the duo's book "Good Economics for Hard Times", published by Juggernaut, here on Friday.

Staying away from jargons, and talking about their work to an audience that mostly comprised youngsters from different walks of life and not just economics, the duo, which donated their Nobel Prize money to the Weiss Fund administered by Harvard for research in development economics, ensured that the session punctuated with humour stayed relaxed and interactive.

During "The Juggernaut Dialogue" moderated by mediaperson Prannoy Roy, Esther Duflo pointed out that it was wrong to assume that giving handouts to the poor made them lazy.

Banerjee said that their research had shown that the same made them enthusiastic. "We have tested this theory across countries. Also, why do we always tend to blame these individuals when there are sharks all around?

"If the poor are given assets, for example cows and goats, and basic training to start a business, over a period of time they inculcate a confidence to stand on their feet and make ends meet. This was first tried in Bangladesh and seven other countries later," Banerjee said.

Talking about the economic slowdown in India, Banerjee said that it was important that there were no more cuts in corporate taxes.

"It needs to be understood that the corporate sector is not short of cash. Just that it is not investing. What you need to do is get the demand side going. Get the money in the hands of the people, and they will spend. This government has ensured that almost everybody has a bank account; therefore the infrastructure is in place. Several measures can be taken to arrest the downward slide of the economy," Banerjee said.

At a time when farm loan waivers have become an almost everyday news, Banerjee stressed on the need to have a well-oiled machinery that can provide relief to the distressed.

"I don't think waivers are very efficient. If a drought destroys crops, only those farmers who had taken a loan would get a waiver, for others, there is absolutely nothing. They won't get any kind of relief," he said.

The duo along with Sendhil Mullainathan co-founded J-Pal (the Abdul Latin Jameel Poverty Action Lab), which has offices in every continent. It conducts studies in 80 countries, with the largest set-up being in India boasting of 200 staff members.

"When we were studying the impact of women as head of panchayats, a field officer said that they were merely puppets. However, our research proved that they may be shy and not talk much, but had done some remarkable work in creating infrastructure," said Duflo.

Banerjee elaborated on what he calls 'nudges' and how they can be instrumental in achieving goals.

"One may think that a small reward/reminder is inconsequential, but it can go a long way. While studying the penetration of immunisation in Udaipur, we came across a very low number. But when people were assured of a kilogram of dal if they came forth for regular dosage, the percentage went up several times," Banerjee said.

Talking about the gap between research and action, Duflo insisted that actionable part of research is at the heart of what J-Pal does.

"Yes, sometimes there are clashes with policymakers, but then one has to be patient. In fact, we have noticed that they too are showing more interest. Whenever a policymaker wants to implement something, we can help with staffing to ensure that he has the right people to oversee things on the ground," Duflo said.

Lamenting that the banking sector lived outside the world of small businesses, Banerjee added, "They know who are capable entrepreneurs. Why not approach them?"