Admiral Karambir Singh was speaking to media persons on board the IAC Vikrant which is currently engaged in the second sea trial since October 24. 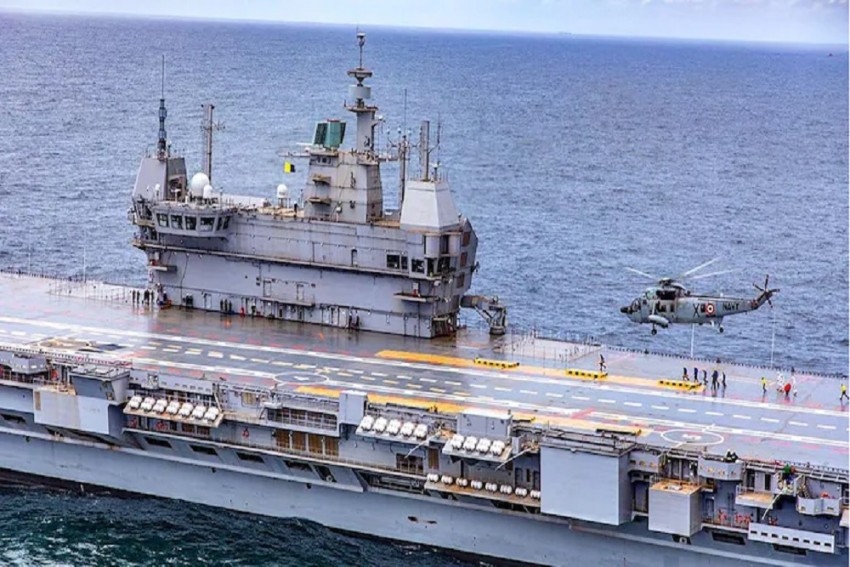 Admiral Karambir Singh was speaking to media persons on board the IAC Vikrant which is currently engaged in the second sea trial since October 24. He evaluated the IAC Vikrant, along with the Union Minister of Ports, Shipping and Waterways, Sarbananda Sonowal.

"The aircraft carrier task force is extremely important as their power is critical. The Navy will operate from where the nation's interests lie. India does not want a navy which is tethered to the shore. We should be able to operate from anywhere where India's interest lies and this carrier gives us that capability," Singh said.

"The Cochin Shipyard Limited (CSL), for instance, is building a dry dock which is going to be able to take 65,000 tonne ships. We have taken on a very steep learning curve at a faster pace. If we have to build again, we would be able to cut down the timeline substantially," he said.

The Navy chief attributed the delay in the building of the IAC to the outbreak of the COVID-19 pandemic as well as the decision to rely on Indian steel, but pointed out that the wait had its merits.

"There was a few years' delay because we wanted to use indigenous steel... because of this development of DMR 249A, all our indigenous warships today have Indian steel. There was a delay but it has got a pay off also," he said.

The high-grade DMR 249A steel is produced indigenously and is being used for the construction of various warships in the country including the engineering marvel, 40,000 tonne IAC Vikrant.

Explaining the role of the Navy in protecting the interests of the country, the CNS said the Aircraft carrier force was essential to protect the trade through the seas.

"There are two main roles in which the navy is involved. One is sea denial which is done by the submarines. That means denying the enemy the use of the seas. And then there is sea control wherein you require dominance over air, surface and underwater. The carrier group is central to sea control," he said.

Another Navy official told PTI it was a proud moment for the Force that it could host the Navy chief and the Union Minister in the second sea trial itself.

"We are conducting an endurance trial among others. Various maneuvering tactics are being tested. This is a huge ship weighing over 40,000 tonnes. We need to make sure that everything works perfectly under all circumstances," the official said.

The Navy officials briefed the CNS and the Union Minister about the current progress in the sea trial and took them around the vessel to understand it in a comprehensive manner.
The maiden sea sortie of the IAC Vikrant, the largest and the most complex warship built in the country, was successfully undertaken on August 21 this year.

The chopper team comprising two ALH and the Sea King flew past the ship multiple times and demonstrated the landing and take-off maneuvers.

With the delivery of IAC, India would join a select group of nations with the capability to indigenously design and build an Aircraft Carrier.