If Congress High Command Forgives Rebels, I Will Welcome Them Back: Ashok Gehlot

Since the power tussle between him and Sachin Pilot resurfaced this month, the Congress veteran has used harsh words against his former deputy, once even referring to him as 'nikamma' or useless. 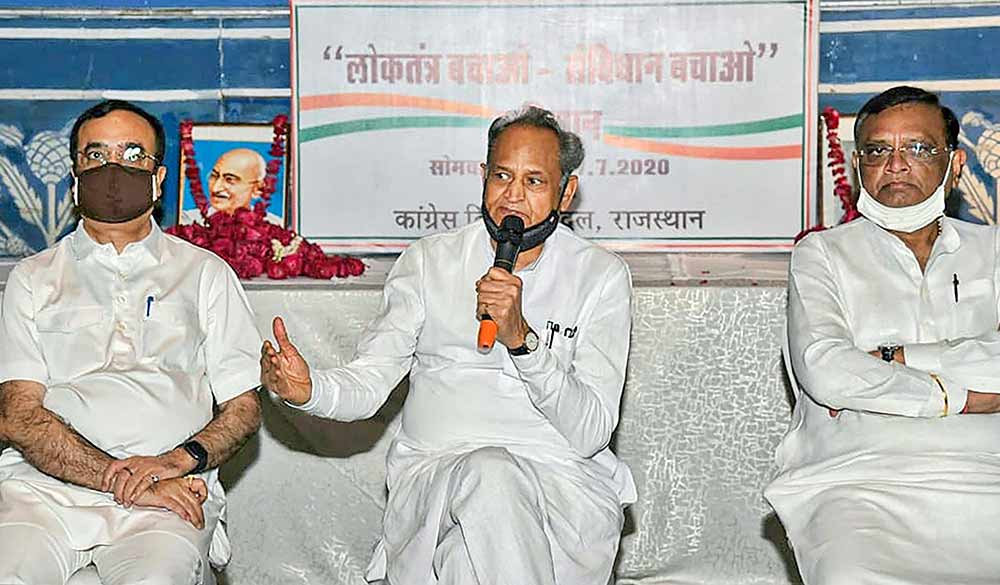 Rajasthan Chief Minister Ashok Gehlot on Saturday urged Prime Minister Narendra Modi to get the alleged attempt to topple his government stopped and said he is open to welcoming back the Congress rebels led by Sachin Pilot.

Answering queries from reporters, Gehlot said if the Congress high command forgives the dissidents, he will embrace them.

Since the power tussle between him and Sachin Pilot resurfaced this month, the Congress veteran has used harsh words against his former deputy, once even referring to him as “nikamma” or useless.

Gehlot said he will do whatever the Congress leadership wants and gave the party the credit for becoming the Rajasthan chief minister thrice.

The chief minister was on his way back to Jaipur after an overnight stay at Jaisalmer’s Suryagarh resort, where loyalist MLAs have been shifted ahead of the assembly session from August 14.

The Congress has accused the BJP of playing a major role in the rebellion by the now sacked deputy chief minister and 18 other Congress MLAs who are threatening his government.

“We have no quarrel with anyone. In a democracy, fights happen over ideology, policies and programmes and not for toppling a government.

"Modi should get stopped whatever is going on in Rajasthan,” the chief minister said outside the hotel where the MLAs were shifted Friday.

Gehlot and the ministers are likely to spend most of their time in the state capital as the Congress tries to keep its numbers intact in Jaisalmer.

He claimed that democracy is under threat in the country is and the Union Home Ministry is after his government in the state.

He repeated the charge that the “rate” for trying to lure MLAs away has gone up after the announcement of the assembly session.

Reacting to BJP state president Satish Poonia's statement over the shifting of Congress MLAs to Jaisalmer, Gehlot called him a new leader who wants to take on former chief minister Vasundhara Raje. He commented that Raje has “disappeared” from the scene.

Poonia had mocked the Congress, asking if the Gehlot loyalists will next move further westward across the border into Pakistan.

MLAs from the Congress and its allies had remained confined to Fairmont hotel in Jaipur since July 13 before being flown to Jaisalmer on chartered flights.

They are likely to visit Tanot Mata temple near the Pakistan border and some other places during their Jaisalmer stay, expected to continue till the assembly session begins on August 14.

Gehlot recalled that he had informed Narendra Modi about the political situation in the state through a letter and a telephone conversation.

He said he will write another letter to Modi asking him to call a video conference of all chief ministers again to review the COVID-19 situation.

He said adequate testing for coronavirus is not taking place in some states while Rajasthan has increased its testing capacity to 40,000 per day.

“We have done excellent Covid management in the state. The recovery rate is good, the death rate is less than 1 per cent,” he said.

Including the rebels, the Congress has 107 MLAs in the 200-member assembly. The BJP has 72 MLAs.