'...If Delhi Is To Be Saved From Islamic State': Giriraj Singh Urges People To Vote For BJP

Giriraj Singh had earlier alleged that Shaheen Bagh was becoming a breeding ground for the suicide bombers. 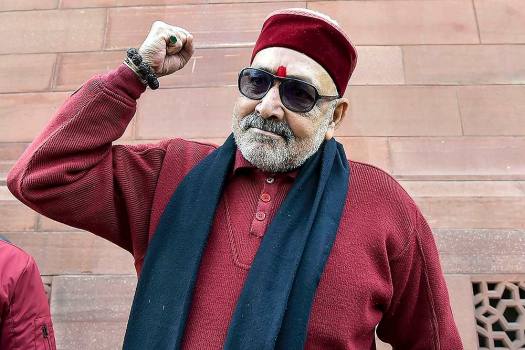 Union Minister and BJP leader Giriraj Singh on Saturday urged people to vote for BJP to "save Delhi from becoming an Islamic state".

"Shaheen Bagh supporters have come out to vote for Kejriwal. My appeal to the people of Delhi is that if Shaheen Bagh has to be stopped... if Delhi has to be saved from becoming an Islamic state, then go out and vote for the BJP," Singh tweeted.

Singh had earlier alleged that Shaheen Bagh was becoming a breeding ground for the suicide bombers. He had tweeted a video of Burqa-clad women making fiery speeches against the Citizenship Amendment Act.

The polling for 70 assembly constituencies of Delhi started today at 8 am.

Delhi is witnessing a triangular contest among AAP, BJP, and Congress. In the last poll, the AAP had won 67 seats, while the BJP won three seats. Congress failed to open its account.