If PM Believes In Hugging Kashmiris, Why Was I Stopped: Yashwant Sinha 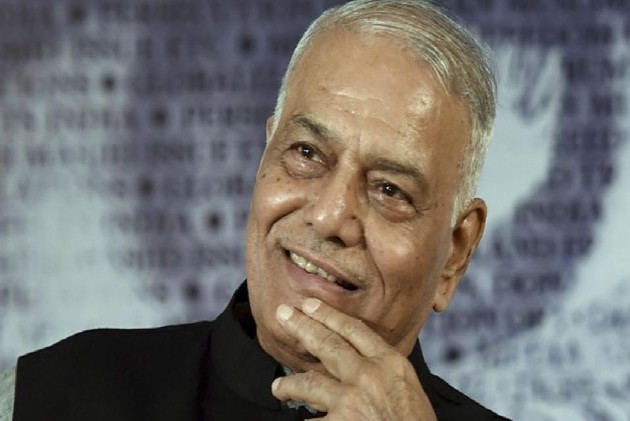 Days after Former External Affairs Minister Yashwant Sinha was stopped at Srinagar airport and sent back to Delhi amid high drama, Sinha says he will continue with his efforts to visit the Valley. Sinha spoke to Outlook about the drama that unfolded at the airport and says Kashmiris wouldn’t be impressed by Prime Minister’s promise of ‘hugs and heaven’.

Q) Prime Minister Modi recently said that ‘we must hug each Kashmiri and create a new paradise in the valley’. Do you believe so?

Two Orders And A 'Request', But Yashwant Sinha Refuses To Leave Srinagar Airport

Three years ago, Modi said at the ramparts of the Red Fort that ‘let’s not accuse Kashmiris, let’s embrace them. Yesterday (Thursday), during in an election rally in Nashik, the PM repeated that we must 'hug Kashmiris’. When I tried to go there and hug them, I was stopped. What can you say to a person who holds such a high position saying things in which he doesn’t believe himself? You may say in Delhi or Maharashtra that we will turn Kashmir into heaven. But Kashmiris are not going to be impressed.

Q) You were sent back to Delhi from Srinagar amid high drama. Could you tell us how the events unfolded at the airport?

I decided to visit Jammu and Kashmir after the government on September 16 told the Supreme Court that everything was normal in the state except for five-six police stations in the Valley and that there were no restrictions in place. I was accompanied by members of the Concerned Citizens Group —Bharat Bhushan, Kapil Kak and Sushoba Bharve.  When we reached at the airport, I was stopped by the Deputy Commissioner of Budgam district from moving further. However, he said others could go.

Though I told him that I have been coming to Kashmir for many years on a peace mission, he didn’t relent. So I demanded an order in writing.  After two hours, he came back with an order, which said that under Section 144 of the CrPC, there are credible inputs from various sources that my visit will hamper law and order situation.

Q) You also said that the administration forced you to return to Delhi?

The police were persuading me to return to Delhi. I did not budge, and I told the DM that they have to show another written order.  At 5 pm, the SP came back with another order, which said that I couldn’t stay at the airport since it was a defence airport.

I told him that I won’t consider the order as constitutional, moral or legal and demanded they arrest me and take me to a magistrate.

Around 5:30 pm, they came to the lounge with a wheelchair and told me that they will take me out. But, they took me to the boarding gates instead. I protested and there was a bit of commotion. Police pinned me down when I tried to get up. They forcibly put me in a Delhi flight, which was leaving at 5:45 pm. Rest of the group members were locked in the reserved lounge so they couldn’t witness the scene for 15 minutes. They warned everyone not to take videos.

Q) It is the 46th day of lockdown in the valley. Do you think the situation is normal as the government claims?

If things are so normal, at least the government offices in the airport should be working. But they were not. I went to the J&K tourism department, and not a soul was to be seen. Offices were closed, except for a small eatery. There were very few passengers at the airport too.

Q) What will be the implications, in your view, of the recent arrest of former J&K CM Farooq Abdullah under Public Safety Act (PSA)?

I consider Farooq as a nationalist and he’s also a current Member of Parliament. He is an old man and his health is also a concern. But even all these factors didn’t prevent the administration from arresting him. By taking such steps, the government has destroyed whatever pro-India sentiments were left in the Valley and they have destroyed those who supported India.

I will not go to the Supreme Court for two reasons. Recently while hearing the personal liberty petitions, the Supreme Court, in its order, has given supremacy to the state, not to the fundamental right of the citizen of the country. They made their intentions very clear that it’s the state, an individual or his fundamental rights are not important.

The second reason is that the SC is not a visa-issuing authority for a visit to Kashmir. So, I don’t approve anyone approaching the SC to visit Kashmir.

Yechury’s reasons were different because he wanted to bring CPM leader Yousuf Tarigami to Delhi for treatment. Ghulam Nabi Azad was allowed to visit four districts on the condition that ‘you will not indulge in any political activities’. Even the SC authorized the government to stop all the political activities except the ones which the government wanted. Why should we accept such restriction from the SC? Why should a free citizen of a free country need the permission of the SC to travel to any part of the country?

Q) Do you think the Kashmir issue could have been handled differently?

During our earlier visits to the Valley, we found that young people are completely alienated from the rest of the country. There was a glimmer of hope if we tackled the issues according to what Vajpayee said. This government is only interested in mouthing the slogans of ‘insaniyat, kashmiriyat and jamhooriyat’, but is not interested in implementing it. Our recommendations of engaging Kashmiris in a dialogue process fell on deaf ears. Then they came out with these steps. All the reports now suggest that the Kashmiri population in the Valley is even more alienated today and they have now prepared themselves for a long fight.

Q) There are allegations of child detentions and human rights violations from the Valley. What are you hearing from there?

The situation obviously is very different from what’s being reported unfortunately in the Indian media. Media is responsible for turning a blind eye to the excesses which are being committed in the Valley. As a nation, we should rise and oppose. Over 70-80 lakh people have been under lockdown for the last 46 days and we consider it as normal. If this had happened in any other part of the country, would we have tolerated it? But there are reasons why a majority of the people are not interested in raising their voice.

Will you go back to Kashmir again?

I have consulted my team members who’ve just returned from the Valley. They are preparing a report soon. I am not ruling out the possibility of another visit to Kashmir.