If Twitter Invokes US Laws, It Should Be Cognisant Of India’s IT Rules As Well: Ravi Shankar Prasad 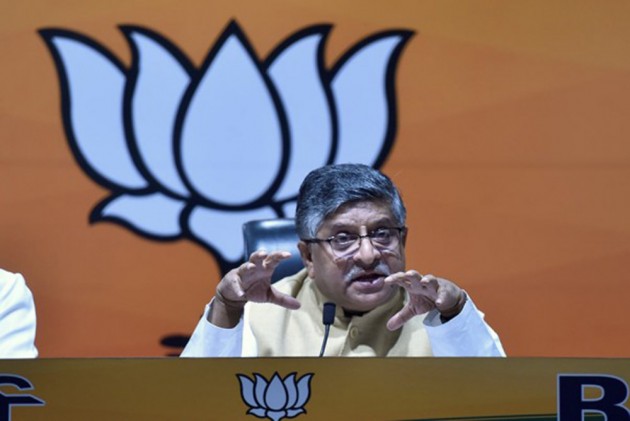 Responding to Twitter’s recent move to block his account, Union minister Ravi Shankar Prasad on Wednesday said that if the microblogging site invoked a US copyright rule to justify its act, then it should also abide by India’s new IT rules while operating in the country.

His comments come in the backdrop of the row between Twitter and the Centre escalating earlier this week, when the site appointed a US official as India’s grievance officer, a move that violated the Centre’s new IT rules.

Further, the site had blocked Prasad’s account on 25th June for an hour alleging violation of the US Copyright Act.

Amid these developments, speaking at the India Global Forum, Prasad on Wednesday said, "If you are going to invoke the... digital copyright act of America then you have to also be cognisant of the copyright rules of India. That is the point.

"You cannot say my whole stand will be regulated by an ex-parte assessment of the US law. For a happy blending of the role of big tech and democracy, a solution has to be found," Prasad said.

He said social media companies are free to do business in India but they have to be accountable to the Indian Constitution and laws.

Micro-blogging platform Twitter has been at loggerheads with the government over various issues, including during the farmers' protest in January and later when it tagged political posts of several leaders of the ruling party BJP as "manipulated media", drawing a sharp rebuke from the Centre.

All significant social media companies, with over 50 lakh user base, will have to appoint a chief compliance officer, a nodal contact person and a grievance officer. All of them have to be resident in India.

Prasad further said the issue of social media in India is around abuse of the rights of victims on those platforms and the companies' accountability.

"If democracy has to survive misinformation, fake news, colluded material...all these are challenges. I am not in favour of censoring but democracies have to find a common ground as far as these issues are concerned so that these big tech companies do their business, earn good money, good profit but become accountable. This can only happen if you follow law of the land," Prasad said.