IITs To IISc: How Students From Campuses Across India Came Out In Support of Jamia After Police Crackdown

Police crackdown on Jamia and AMU students have brought out students from campuses across India in protest against the incidents and Citizenship Act. 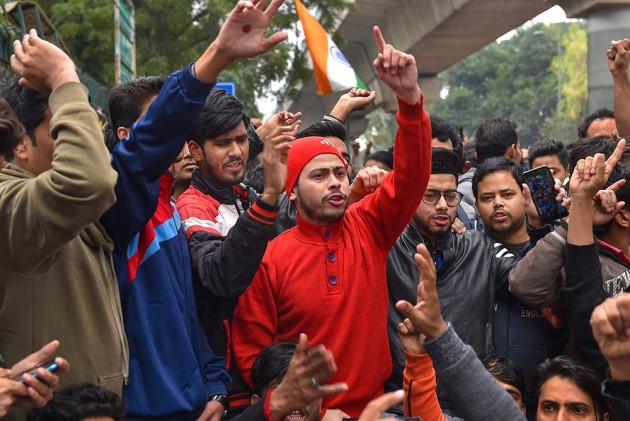 The police crackdown in Delhi's Jamia Millia Islamia sent angry waves through the country on Monday with students holding demonstrations in several campuses, including three IITs.

On Sunday, violence broke out in the national capital during protests against the controversial Citizenship Amendment Act and the police entered Jamia university campus, allegedly beating up and injuring hundreds of students. Soon after, thousands across India took to the streets in solidarity with the Delhi-based institute demanding a probe into the use of teargas inside the Jamia library as well as police entering the campus without permission from university authorities.

According to Jamia's Vice Chancellor, 200 people, majority of them students, have been injured in the police crackdown and university property has also been damaged.

Anti-Citizenship Law Demonstrations Swell Across India, But Who Is Protesting For What?

The first students to take to the streets were from Aligarh Muslim University (AMU) who started a protest as soon as news of Jamia incident got out. The students' protest clashed with the police who fired teargas shells and lathicharged protesters, who they accused of pelting stones. Internet was suspended in Aligarh after the incident from 10 pm on Sunday to 10 pm on Monday. At least 60 AMU students have been injured.

The Jamia and AMU crackdown led to midnight outrage as students from Jawaharlal Nehru University (JNU) and Delhi University were joined by others in holding a massive protest at the Delhi Police Headquarters in ITO.

Later the same night, there were angry demonstrations at the Banaras Hindu University (BHU) in Varanasi and the Jadavpur University in Kolkata with demands that the government take action against police assault. IIT Bombay and Tata Institute of Social Sciences lent solidarity to the protests in Mumbai by taking out rallies and shouting "Shame on Delhi Police". Students led by the leftist students' organisation DYFI also hit the streets in Kerala's Thiruvananthapuram.

The premiere institutions -- IIT Kanpur, IIT Madras and IIT Bombay -- are not the regular ones to join protests and usually stay away from agitations. But this time they came out in support of the students of Jamia and AMU.

Students at the prestigious Indian Institute of Science (IISc), Bengaluru, also joined the protest. A student leading the protests said, " To work in this climate for a government that not only threatens us with de-citizenship but also dehumanises us when we try to raise our voice, is to submit ourselves to enslavement."

There was heavy police presence in university campuses to control the situations.

On Tuesday, in Hyderabad's Maulana Azad Urdu University, students held a protest march post midnight in solidarity with the Jamia students and demanded that their exams be postponed.

In Lucknow's Nadwa College, students gathered in the hundreds shouting slogans like "Awaz do, hum ek hain" (call us we are all united) as police tried to control the situation.

"Some students of the Nadwatul Ulama here tried to protest and hurled stones from inside. They were prevented and no one is allowed to come outside the campus," said Uttar Pradesh Director General of Police O P Singh.

Several Delhi University students boycotted exams and held a protest outside the Arts Faculty in North Campus to express their solidarity with the movement. They said they will gather at India Gate on Monday evening.

At ground zero of the student movement, a group of Jamia students stood shirtless in the bone-chilling cold of a Delhi morning to protest the action against their colleagues on Sunday.

"We were inside the university when the police barged in. Around 20 policemen came from gate no 7 and 50 others came from the rear gate. We told them we were not involved in the violence. They didn't listen. They didn't even spare women," Khanzala, who suffered injuries to his legs and abdomen, said. A women broke down as Khanzala showed his injuries to the media.