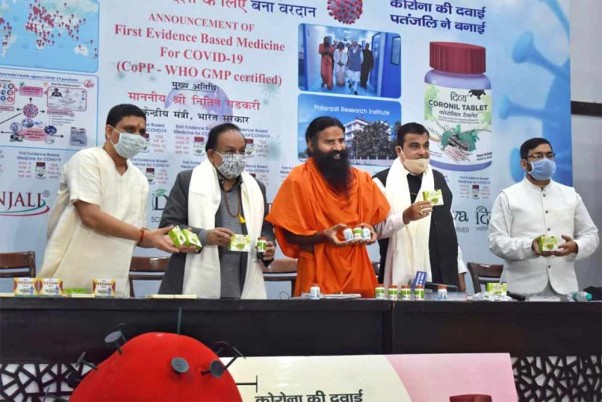 The Indian Medical Association (IMA) expressed its concerns over the "blatant lie of WHO certification" for Patanjali's Coronil tablet, which is claimed by the company as evidence-based medicine to fight Covid-19. The organisation further demanded an explanation from Union Health Minister Harsh Vardhan in whose presence the medicine was launched.

This development came after the World Health Organisation clarified that it has not reviewed or certified the effectiveness of any traditional medicine for the treatment of the virus.

Yoga guru Ramdev's Patanjali Ayurved had on February 19 said that the Coronil tablet had received certification from the Ayush Ministry as a medicine supporting Covid-19 treatment as per the World Health Organization's certification scheme.

However, Patanjali’s managing director Acharya Balkrishna later made a clarification about the certification through a tweet saying, "We want to clarify to avoid confusion that our WHO GMP compliant COPP certificate to Coronil is issued by DCGI, Government of India. It is clear that WHO does not approve or disapprove of any drugs. WHO works for building a better, healthier future for people all over the world (sic)."

In a statement issued on Monday, the Indian Medical Association (IMA) said, “Being Health Minister of the country, how justified is it to release such falsely fabricated unscientific product to people of the whole country...can you clarify the time frame, the timeline for the so-called clinical trial of this said anti-corona product?"

"The country needs an explanation from the minister. The Indian Medical Association will also write to National Medical Commission for seeking suo moto explanation for his blatant disrespect to the code of conduct of Medical Council of India,” the IMA said.

"Indian Medical Association is shocked to note the blatant lie of WHO certification...," it said.

The announcement regarding the Ayush certification for Coronil and the release of a research paper calling it the "first evidence-based medicine for Covid-19 by Patanjali" was done at an event here attended by Vardhan.

In a statement, Patanjali had said: "Coronil has received the Certificate of Pharmaceutical Product (CoPP) from the Ayush section of Central Drugs Standard Control Organisation as per the WHO certification scheme."

However, WHO South-East Asia in a tweet said: "@WHO has not reviewed or certified the effectiveness of any traditional medicine for the treatment #COVID19."

Patanjali had introduced Ayurveda-based Coronil on June 23 last year, when the pandemic was at its peak. It had to face severe criticism as it lacked scientific evidence regarding its efficacy.