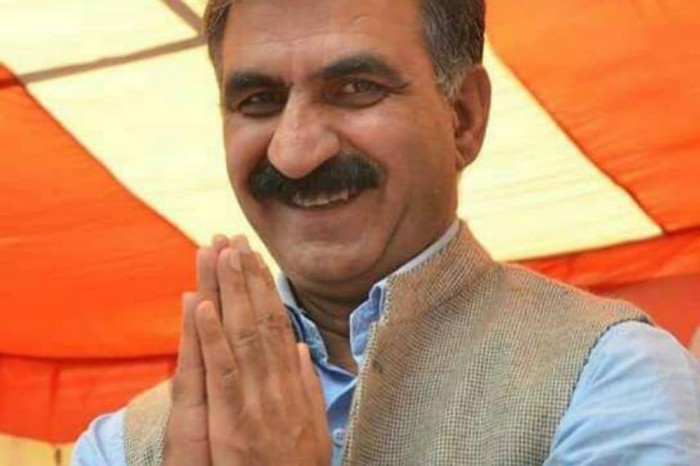 After Bharatiya Janata Party defeat in the recent bypolls, including Mandi –Chief Minister Jai Ram Thakur’s home district, the Congress is seeing itself one step closer to power.

The state where BJP and Congress swap over every five years, will witness next assembly polls in the 2022.The bypoll results has certainly come as a shot in the Congress arm but with no clarity as who will be party’s next Chief Ministerial face.

Ashwani Sharma of Outlook spoke to Sukhwinder Sukhu, a sitting MLA and former PCC president in Shimla about Congress’ future leadership in the state.

Do you think winning bypoll is a ticket to power?

Certainly not. But, it’s a fact that if an opposition party works hard and unitedly fights the polls on the public issues, the incumbent government can’t stand its way. This is the reality in Himachal Pradesh. That is why even established leaders like Shanta Kumar, Virbhadra Singh or Prem Kumar Dhumal lost power .The bypoll victory is almost like 'coming events casting its shadow before'. I can say we have won the battle ,now a war remains .

But aren’t next polls going to be tough for the Congress, since it doesn’t have leaders like Virbhdra Singh?

It’s a myth that Virbhadra Singh ji used to bring the Congress back to power. We had no prominent Congress party face in the bypoll, yet we have won. The underlying principle is that people vote to defeat an incumbent party to effect a change. But, I can say 2022 will be the first assembly poll when the Congress will have a leader from the next generation.

Who is going to be your CM face or under whose leadership you are going to fight the elections?

We have to fight the next polls under a collective leadership as happened in case of bypoll. Naming a Chief Ministerial face is not a policy of the Congress. But after the poll, the party high command will take a call on who should lead the government. For me he should be a person with knowledge ,experience , integrity ,vision and acceptability in the party and all regions of the state.

The BJP says Congress has a CM post aspirant in every district, won’t it harm the party prospects to power?

There is no harm in aspiring to be Chief Minister. The high command is well aware of who potential leaders are, or who really possesses the qualities to lead the state once the party returns to power.

Are you also a contender?

(Laughs) .Am, I am not eligible for the post ? I have my own standing and merit .I have worked from the grass-root to the highest party position and strengthened the congress in the state.

But, is your organisational structure as strong as that of the BJP?

It’s true ,the BJP ‘s organisational structure is more effective .We need to undertake some sweeping changes in the party and do necessary corrections. There are party office-bearers ,who never belonged to the party’s ideology and soul.I think the high command is working-out modalities to effect changes in the party set-up .It will be known very soon.

What were potent issues in the bypoll having really turned the tables on the BJP?

Price rises are one of the most burning issue.It has hit every single household ,even the BJP cadres and their families,felt the pinch and did not vote for their own party. Then, a lack-lustre governance , unemployment ,corruption and inefficiency of the leadership (Jai Ram Thakur) to handle Covid situation resulted in so many deaths, many for lack of proper hospital care.

The BJP claims it has given a “double engine ki Sarkar” to Himachal Pradesh?

Their double engine is rotting in the rust .We will invent a new single engine to take Himachal Pradesh fast forward on the path of development, growth free from corruption and a clear vision on dealing with problems like unemployment and rising prices .The new government will work towards empowerment of women, their greater share in power and enabling pro-active role citizens in governance.