In A First, An Independent Candidate In Tamil Nadu Releases Election Expenses

Durai Guna, who had contested from the Pudukottai constituency has declared that he received Rs.27,650 as donations for his election campaign 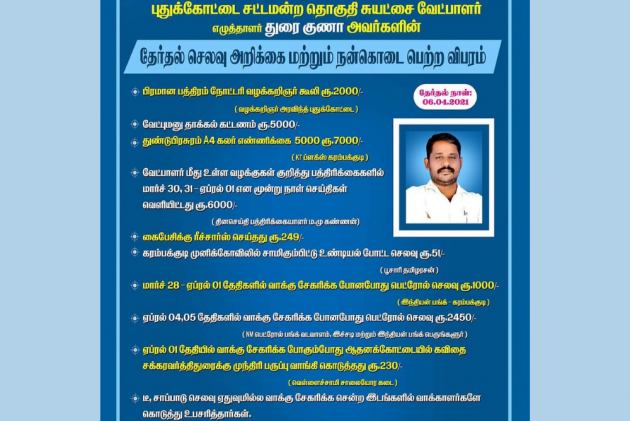 An independent candidate in Tamil Nadu has surprised everyone by declaring his election expenses through posters in his constituency. Durai Guna, an independent candidate from the Pudukottai Assembly constituency, has declared that he received Rs.27,650 as donations from the public out of which he spent Rs. 23,980. He has not indicated what he plans to do with the Rs.3,670 that he managed to save.

Guna (41), a writer and social activist, contested under the symbol of a “nib” and finished sixth in the constituency, polling 476 votes, which was won by the DMK in the April 6 election. His key election promises included improving the water resources of the dry Pudukottai district by reviving canals and lakes and removing the harmful eucalyptus forests that deplete groundwater.

It is interesting to note the breakup of election expenses that Guna has provided in detail. While the regular expenses of notary fee, nomination papers filing fee, printing of bit notices and publishing newspaper ads about criminal antecedents of candidates total Rs.20,000 the other nuggets he has listed make an interesting reading.

M.K. Stalin Takes Oath Along With Gandhi And Nehru

Among them are recharging his mobile for Rs.249, a donation of Rs.51 in the hundi in a temple at Karambakodi (his village), petrol expenses of Rs.3,450 for his two-wheeler while campaigning, and Rs.250 for buying cashew to honour a local poet at Aadhaanakottai. He has explained that he did not incur expenses for food or tea since this was provided by voters themselves.

Asked why he took this route Guna said, that he wanted to have an open and honest relationship with his voters. ”When everyone says people take money and vote I wanted to account for every Rupee I collected from them. Only then they will gain confidence in unattached candidates like me in the long run,” he told Outlook. He said he would spend the left over money for his future social campaigns.